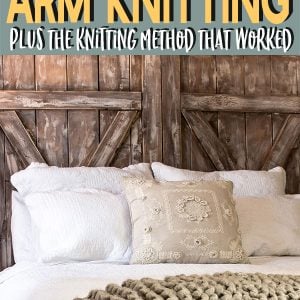 All I wanted was a chunky knit blanket.

What I got was a lesson in DIY failure.

Well sort of, I did eventually work out a solution after a bit of frustration. 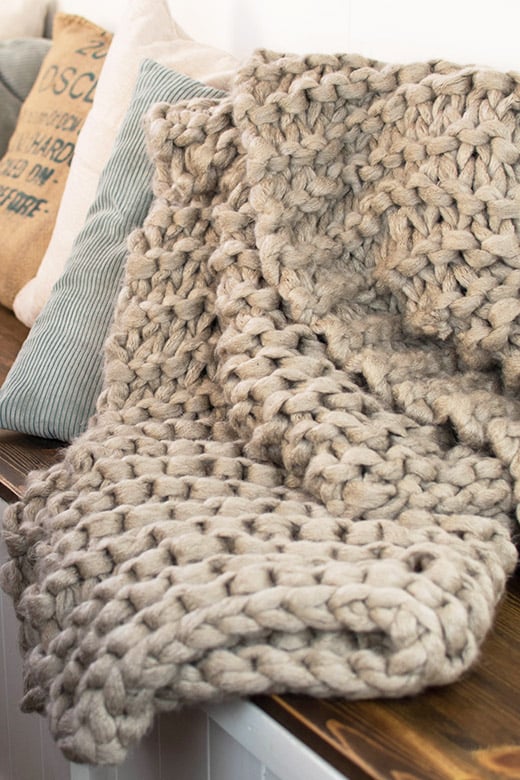 Every time I saw one of these thick big looped blankets, I had the urge to knit one. Last week I stumbled on to a tutorial on how to knit one with your arms. Then I saw another and an another.  They seemed to be stalking me because every time I went to Pinterest the arm-knit-a-blanket-in-40-minutes tutorial was on my front page.

I took it as a sign from the universe and figured it was high time I made one for our bedroom. That inner DIY voice was like “get on this already.”

I have two updates to this post, one 6 months after I made the blanket and one a year and a half later when I finally found the right wool and method to make one of these blankets.  You can read the updates at the end of the post. 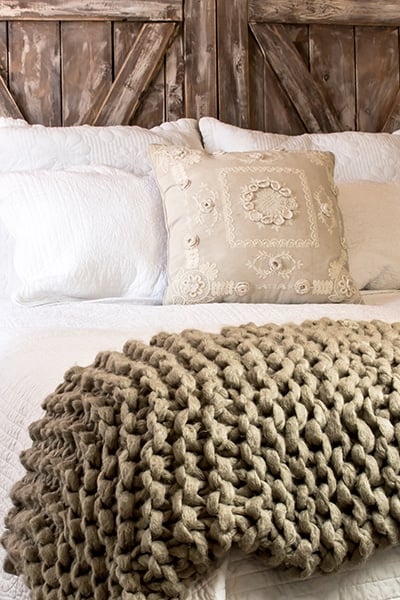 I went hunting for the best “learn how to arm knit”  tutorial.  They are all, for the most part, the same.  They all promised a blanket in less than an hour with step by step instructions.  Perfect.

But that’s not what happened, and that was not my result.

I’m not saying all these arm knitting tutorials are wrong  I am just saying that there are reasons why arm knitting might not work for some.

I can knit, I’m no pro mind you, but I can knit a scarf, which means I can knit a blanket. Right? Someone agree with me quick.  Knitting a scarf or blanket is in principle the same thing only different sizes. Cast on your stitches, knit to the end of the row, repeat until you reach the length want your blanket.

It seemed like I couldn’t possibly fail. Easy Peasy Right? Well not quite.  I followed the arm knitting instructions, and I didn’t make a chunky knit blanket.   When I was knitting, I liked how it looked.  When I finished, however, I wasn’t at all happy.  I didn’t knit anything that resembled a blanket.

I knitted a fishing net.

Honestly, I thought the fault was mine, so I found a video to watch and gave the whole thing a second chance.  I unraveled all my work and started again.  Same results, no different, I still knitted a net.

I didn’t take a photo of the fail before I unraveled it.  The frustration was too high to think about documenting with photos.  I did arm knit a swatch so you could see what I mean.

The following photos are the same.  I didn’t move anything except the camera. The photographs are two different angles.  The swatch looks ok from the side, but when you get above it, you can see the gaps and holes. 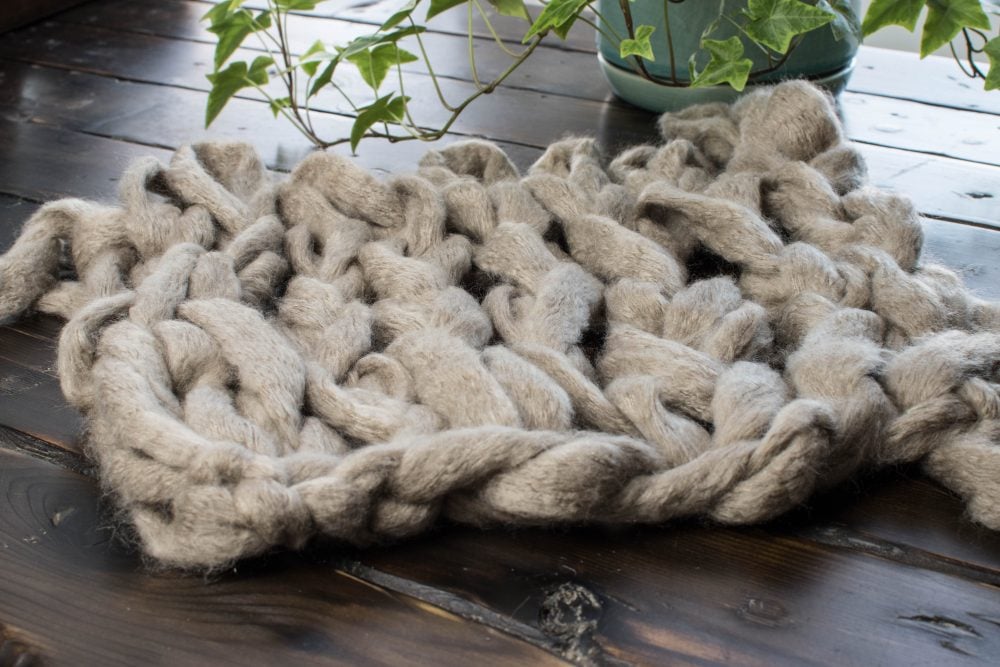 So why did my arm knitting fail?

I’m not giving anyone a hard time over their tutorials.   Arm knitting didn’t work for me but it might for you. Your mileage, as they say, may vary.  Many people seem to love their arm knit blankets, so people do to have success with it. I just wasn’t one of them.  There are also folks like me who had mixed results.

If your arms are tiny, I bet you could arm knit this blanket and have it turn out great. My arms are not, and I am chalking up my arm knitting fail to my big man arms.

Here is a photo that shows the gaps when the blanket is spread out. 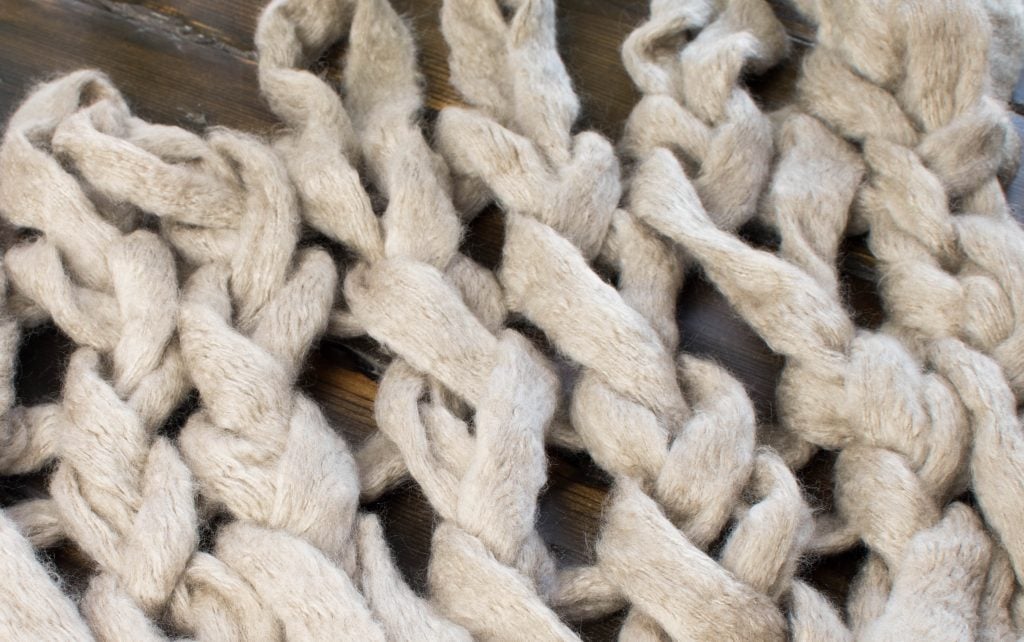 It’s also possible that my expectations were too high.

My buzz for this project came from the videos and the blog posts that we’re all over the place showing off all these beautifully thick knit blankets.  The finished products displayed on the websites all show thick chunky knit blankets. So that’s what I figured my final project would look like too.

If I go back and look closely, I can see the netting in all the finished products. My expectations were too high to see them when I first wanted to knit this up.  I was blinded by a quick, cheap method and didn’t read the fine print.

Steps I followed to make my homemade knitting needles

Also here is a pro tip – If anyone at the hardware store asks what you’re using the dowel for, say a closet.  Trust me on this one.  You will get strange looks when you try to explain how you’re going to knit a blanket with them.

I needed extra yarn with this method.  The tighter knit stitch didn’t spread the yarn as far as before, so I had to order seven more skeins of wool.

I now had 14 skeins of wool! If it didn’t work this time, everyone I know would get a beige scarf for Christmas. Ho, ho, ho.

I started my chunky knit blanket for the third time by doubling my wool.  I figured I would get a nice thick loop if I just knitted the whole thing with double yarn.   Doubling the yarn was a mistake.  It knitted up too thick.

I knitted four balls in before I figured out it wasn’t going to work.  By this time I realized that I didn’t have nearly enough yarn.  I was going to need another 14 skeins of yarn!

Nope – not going to happen. 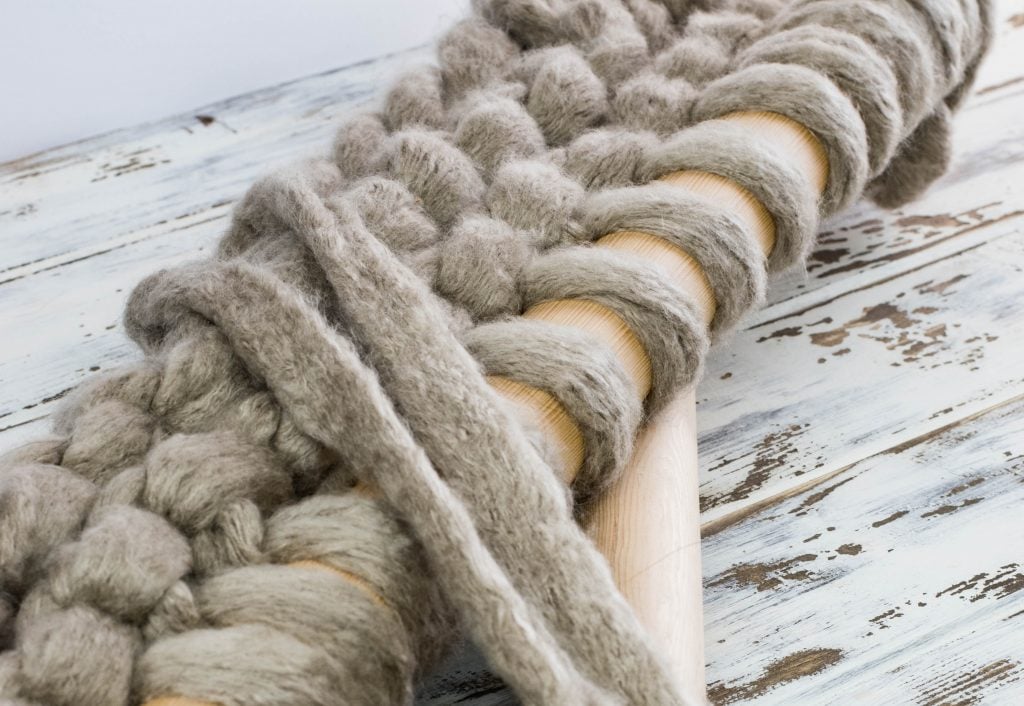 I added the photo above so you could see how thick it was.  After I took this picture, I unraveled it again.  For those you keeping count, that’s three times.  I was having doubts I was ever going to get this chunky knit blanket finished.

I decided to knit it up single strand on my 1.5-inch knitting needles to check the gauge and see if it was going to work.  Wider would be better this time, so I cast on a few extra stitches.  I started with 18 stitches cast on and knitted up one ball of yarn before stopping to see how it was going to look. 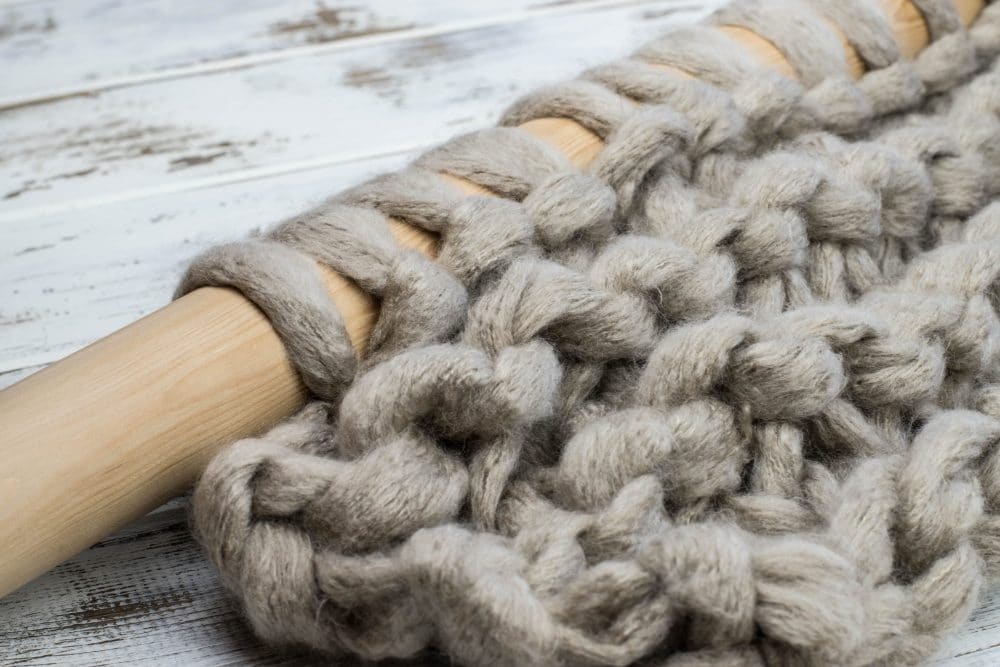 It wasn’t as thick, but I had no complaints, it was knitting up well and had a look I wanted.

~This post may contain affiliate links.  If you click one and make a purchase, I may receive a commission at no additional cost to you.~

I did have minor difficulty holding up the needles as the blanket gained weight. My arms got tired moving the large dowels back and forth, but it wasn’t bad.  I had to knit the entire thing standing. The beautiful thing about the needles, vs. arm knitting, was I could set it down and come back to it later. I split the knitting between two evenings.  All in it took me about 2 hours to finish up my chunky wool blanket.

The giant knitting needle method doubled the time and cost.  But I did end up with something I loved vs. a big ball of unraveled yarn or 14 beige scarfs.   I liked the results far better vs. arm knitting because it wasn’t full of holes and didn’t look netted.

, my ridiculous knitting needles and a bottle of Advil. 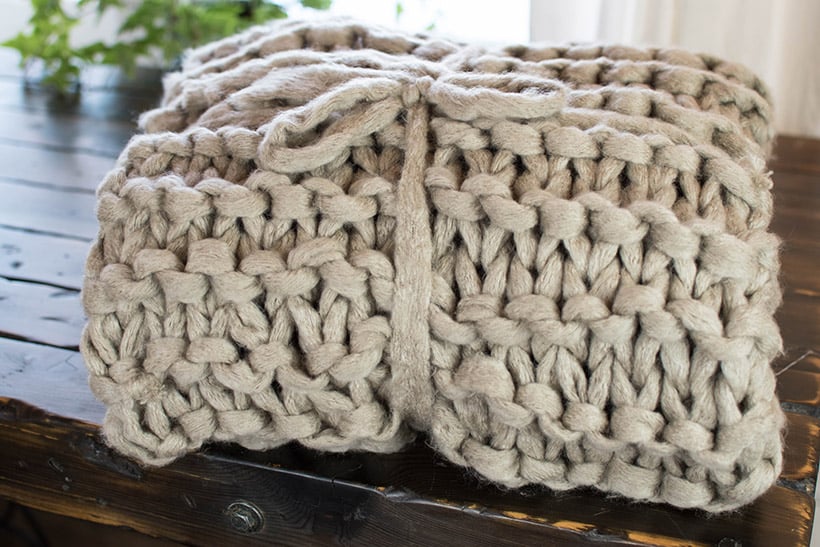 I liked the final results.

The yarn didn’t flatten when I laid it on the bed. Instead, it showed the big thick knitting loops in all their chunky glory.  I should have tested arm knitting with the doubled yarn.  It may have filled much of the gaps and holes and may have made that method viable for me.

This giant yarn blanket added so much texture to my bedroom and seemed to be the thing the room needed. Weird how one item can make or break a space like that.

This blanket is thick, fluffy, and soft.  It’s also incredibly warm.  The perfect throw for cold nights when you want to cozy up.

let’s talk about yarn for a minute 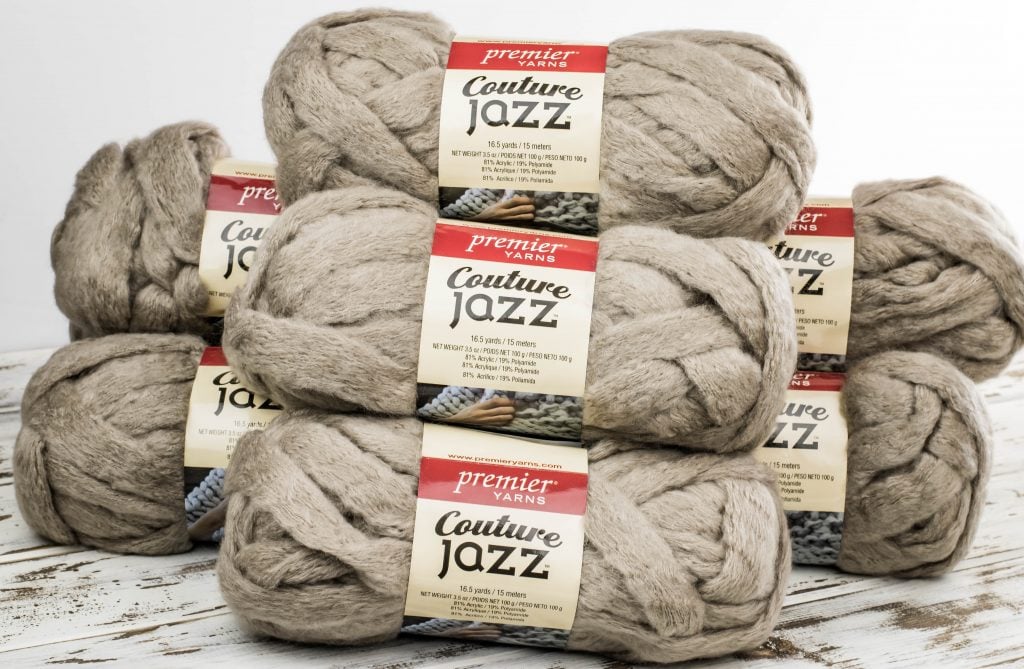 The recommended yarn for arm knitting is Premier Yarns Couture Jazz.  I found mine from Yarn Canada.  The color I used was beige.  It looks like a warm grey to me.  I tried to render the photo above as close as I could to the actual color of the yarn.

If you are ordering online, don’t be fooled by the Premier Jazz beige swatch. The yarn isn’t remotely close to that color.

In the US, Couture Jazz Yarn

can be found on Amazon.  It’s a pretty popular yarn. You should be able to source it at most craft stores.

I would also 100% use this thick yarn again, and I plan on it. It’s lovely despite being an acrylic blend. Using an acrylic was a double bonus for me. It wasn’t as expensive as the roving wool I wanted, and it was washable. With two large slobbery labradors running amok through the house, washable becomes mandatory.

The yarn is very soft and a bit whispy.  Here is a close-up shot so you can see the texture. 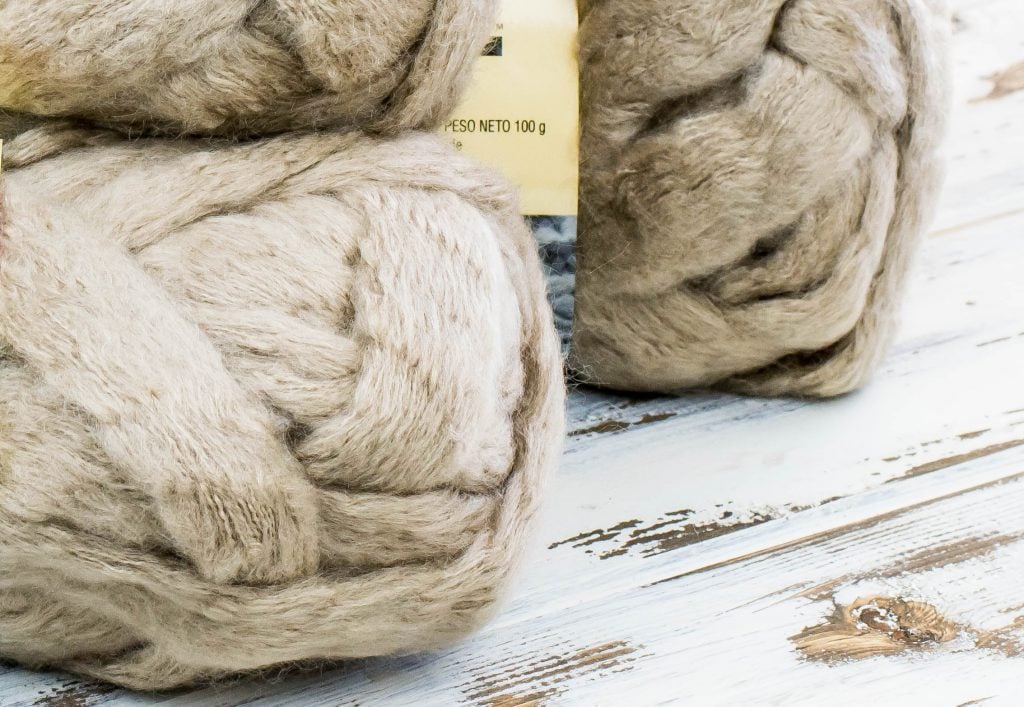 So Arm Knitting wasn’t for me, the results fell flat. If you like a loose-knit, or if your arms are small enough to keep the stitches tight together you should give it a try.

But if you want your chunky knit blanket to have heft and thickness I recommend knitting your blanket up on giant knitting needles.   It is what finally worked for me in the end.

UPDATE:  Here we are almost a year later – I wanted to drop an update about what’s happened with my chunky knit blanket.   Couture Jazz ended up pilling terribly.

By my third month, the blanket (with very limited use) had pilled so much I had to go over it with with a razor for an hour to make it look presentable again.

The blanket still has some beauty, and the pills are only noticeable up close, but they irritate me endlessly.

I’ve tried several different types of jumbo yarn in search of what to use on my next blanket – the jury is still out, but you can check out this comparison here : 6 Jumbo Yarns for all Your Chunky Knit Projects

UPDATE #2:  It’s a year and a half later and after testing and trying all kinds of wool, I finally found the right one.  It’s XXXL wool, by We Are Knitters.  I did a whole post on their Velky Blanket and Peruvian highland wool.  After everything, all the methods, all the wool, this is the one that I was FINALLY happy with.  Barely any shedding, it knits up THICK, and no big holes or thinness.  You can check out that finger knitting post here 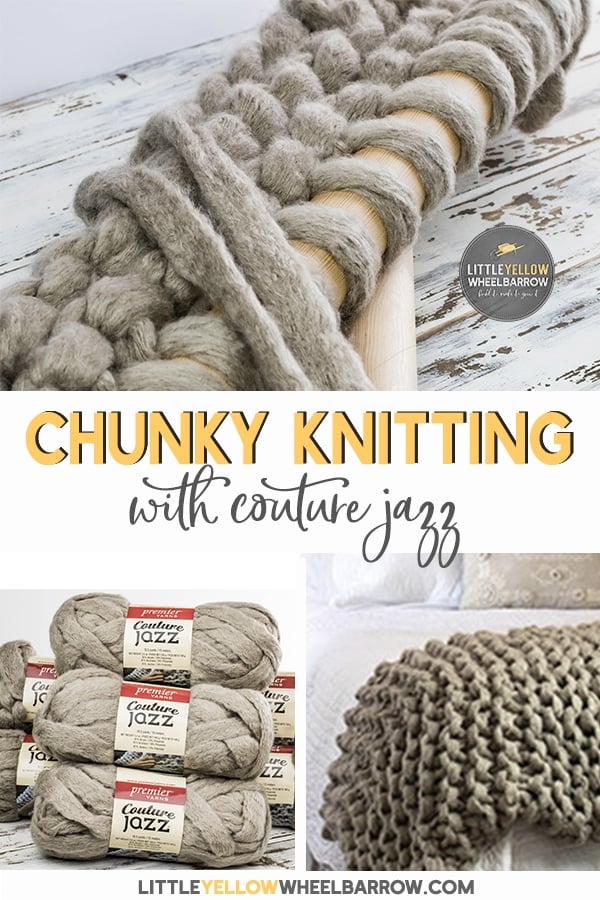 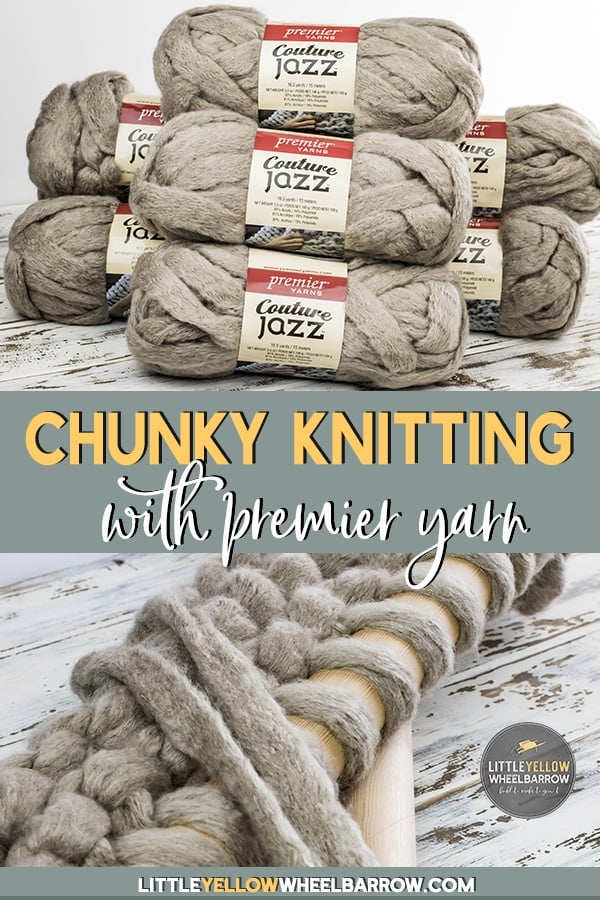 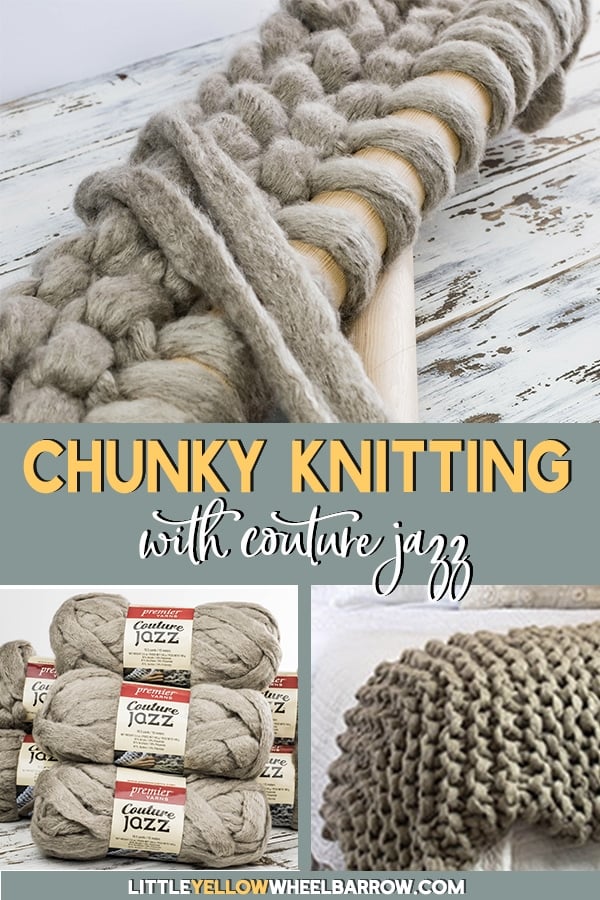