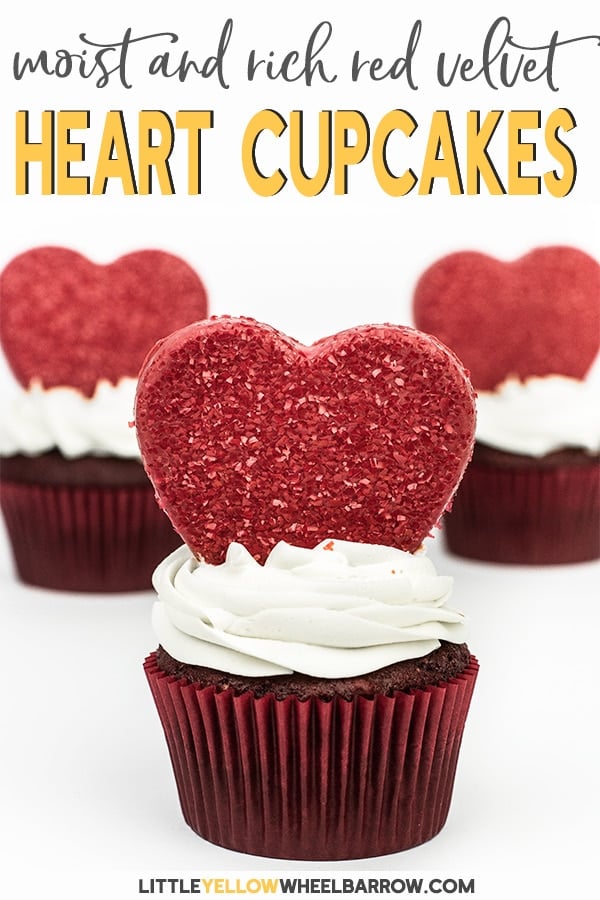 You know, I have never been a big fan of the red velvet cupcakes craze.

I always found red velvet to taste like vanilla, but with an alarming amount of red food colouring taste.

That was until I had a red velvet cupcake at an event that I absolutely loved.  It looked so pretty, so deeply red, so velvety, and realized it was because the baker had added lots of cocoa powder.

Some red velvet cupcakes are so red they look very unappetizing.  Unless of course, you’re down for blood coloured food (I’m not).   When I think red velvet, I think dark red, almost burgundy, rich, and lush.  The addition of chocolate adds that extra dimension, and tones down the red. 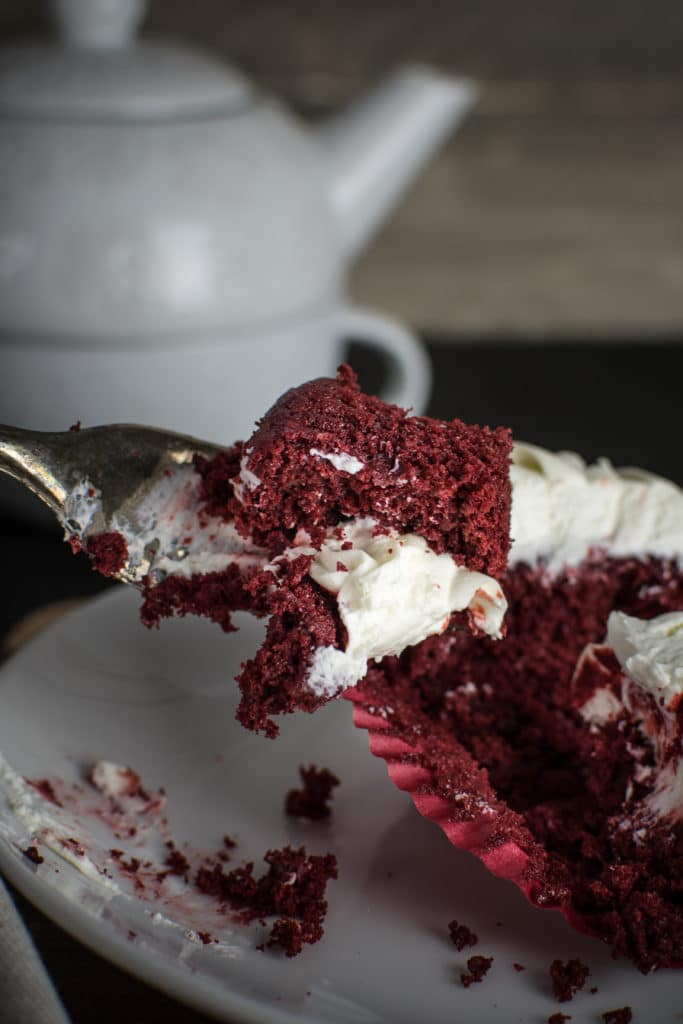 After the event where I had the most divine red velvet cupcake of my life, I went home and tried to replicate the recipe.  After numerous attempts, I nailed it.

These are not airy, tasteless masses with sickly buttercream frosting.    These cupcakes are rich, dense, and moist with a light stabilized cream cheese whip cream topping that tastes fantastic.  I really struggle making them because I kept eating the little devils.

Well, I had to eat several to test the recipe.  It was a sacrifice I was willing to make.

And just to note the husband and I have both been off sugar since July, so these were a terrible idea on my part. 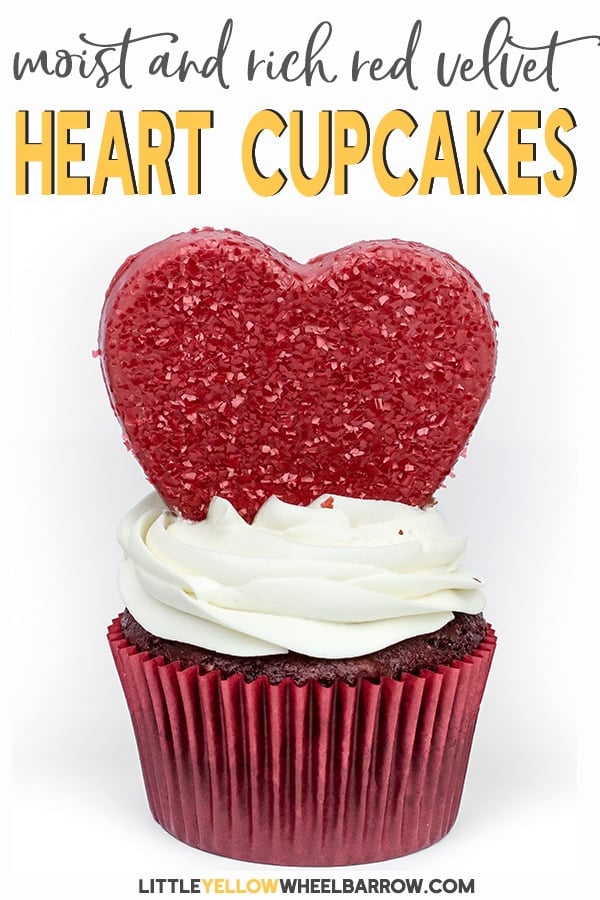 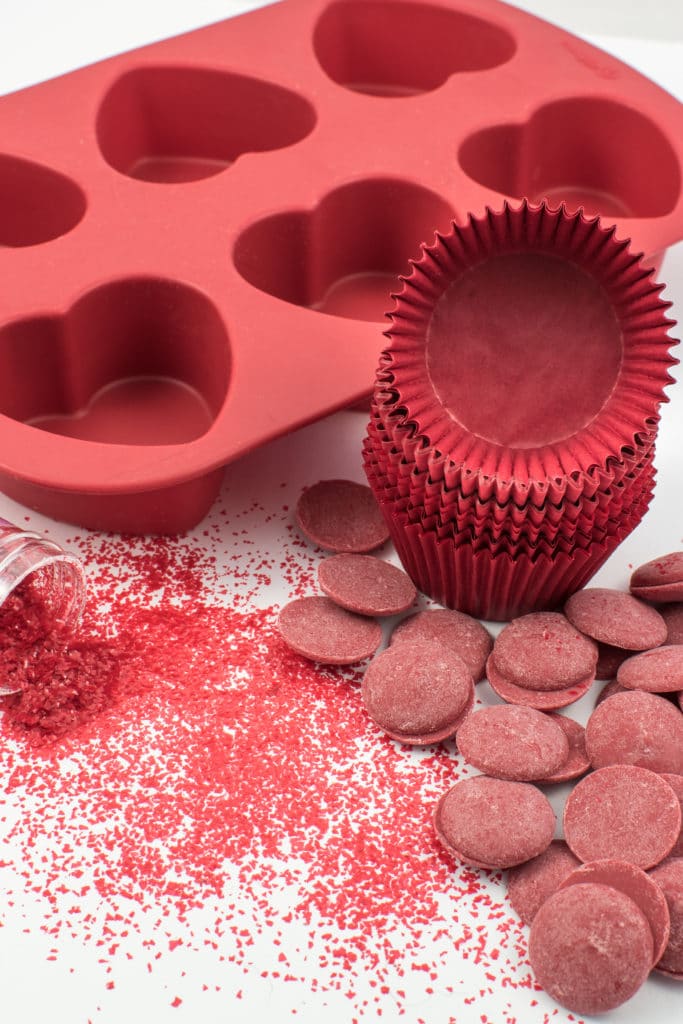 Edible Glitter – What you need to know.

So I had the idea for these glitter hearts after watching the Wizard of Oz the same week I was planning Valentine’s day posts.    That’s how my brain works I guess.  Sparkly shoes = sparkly hearts.

So I went looking for edible glitter and found all kinds!  I ordered pink and red and a variation called “disco glitter”.

For the record, the “disco glitter” was not edible.

Don’t ask me how I know.

If you order edible glitter I recommend the Wilton brand so you are 100% sure it is indeed edible.   I ordered the disco glitter from a cake shop, so I assumed it was edible – my mistake.   The instant I tasted it my brain said: “Hey idiot, you sure that’s edible?”

The real edible glitter doesn’t taste like anything.  It has a very non taste about it but it does add a bit of a crunch to the white chocolate hearts. 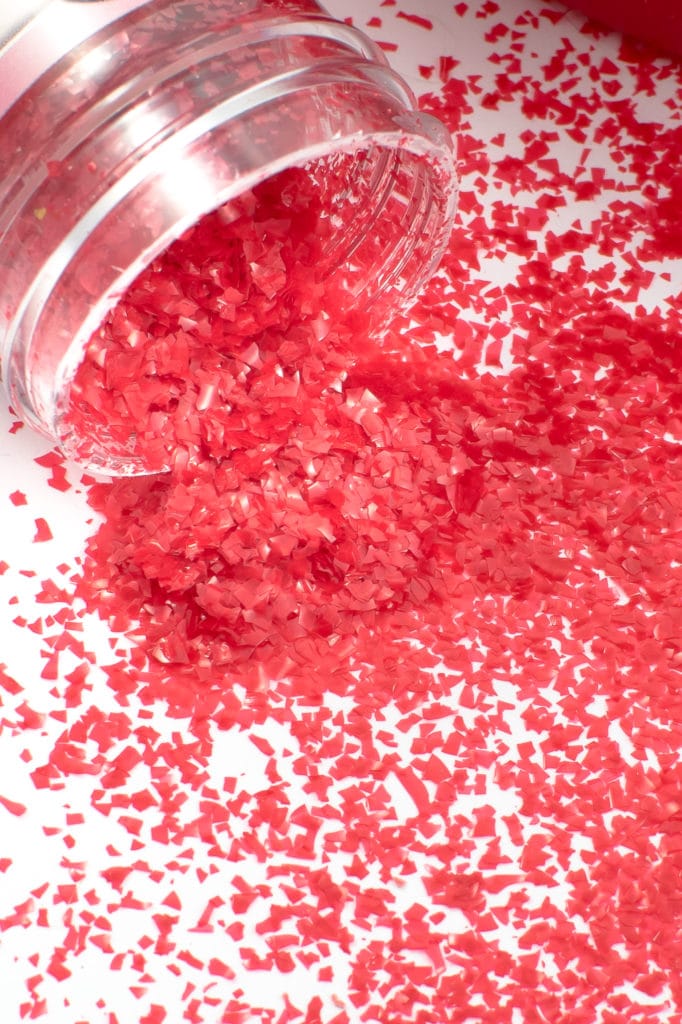 I used a silicone heart mold to make my hearts and it worked perfectly.   I added a heaping melted tablespoon of red candy wafers to each cavity, gave the mold a tap against the table to remove bubbles and waited for it to set.

Once they were set well, I pulled them from the molds.  They popped out of the molds easily and looked great.    They had a nice soft edge and perfectly smooth surface.

I used my small butane torch to ever so slightly (and gently) melt the front of the hearts so I could sprinkle the hearts with glitter.   This ensured the glitter stuck.    If you do this, less is more. The chocolate does not require a lot of heat to melt.

They turned out beautiful! 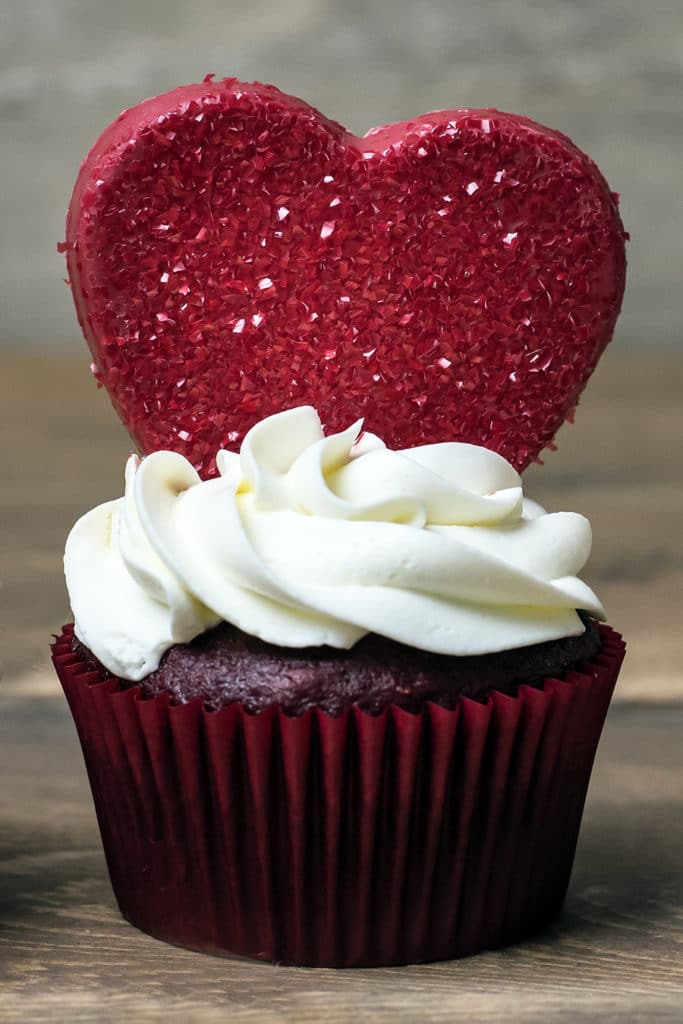 A few quick tips and notes

So a few quick things.   Don’t overbeat your batter.  Just beat it long enough to create a smooth texture without any lumps.  This will make a nice tender crumb. 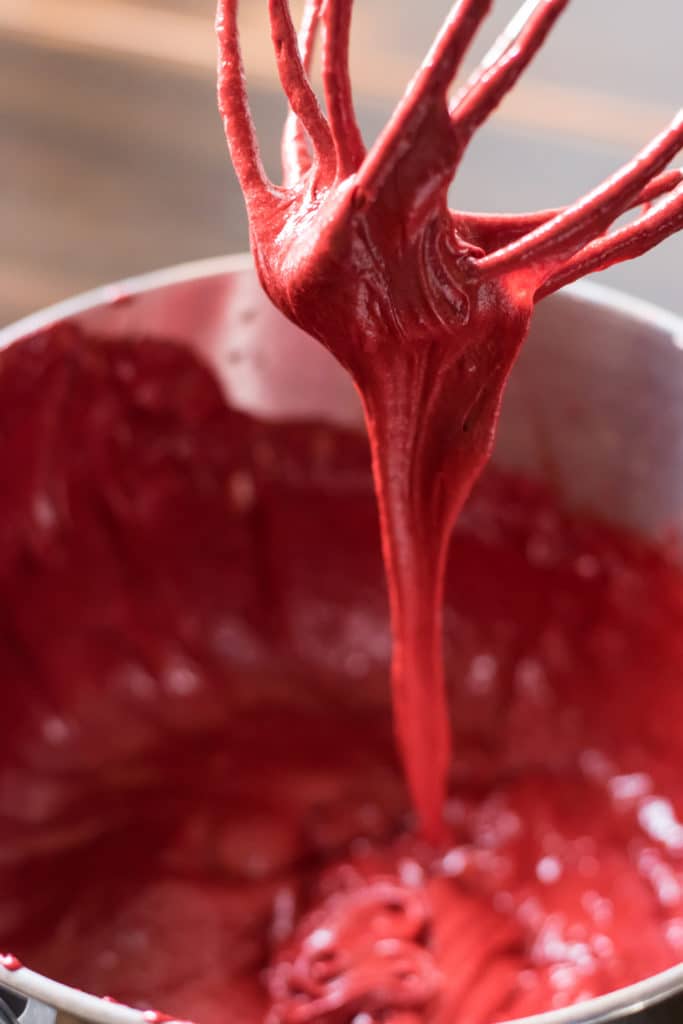 Only half fill your cupcake liners.  Filling over the 1/2 fill line will create bubble tops on your cupcakes, we don’t want that, we want the batter to bake evenly and cup up to just the rim with a gently mounded center. 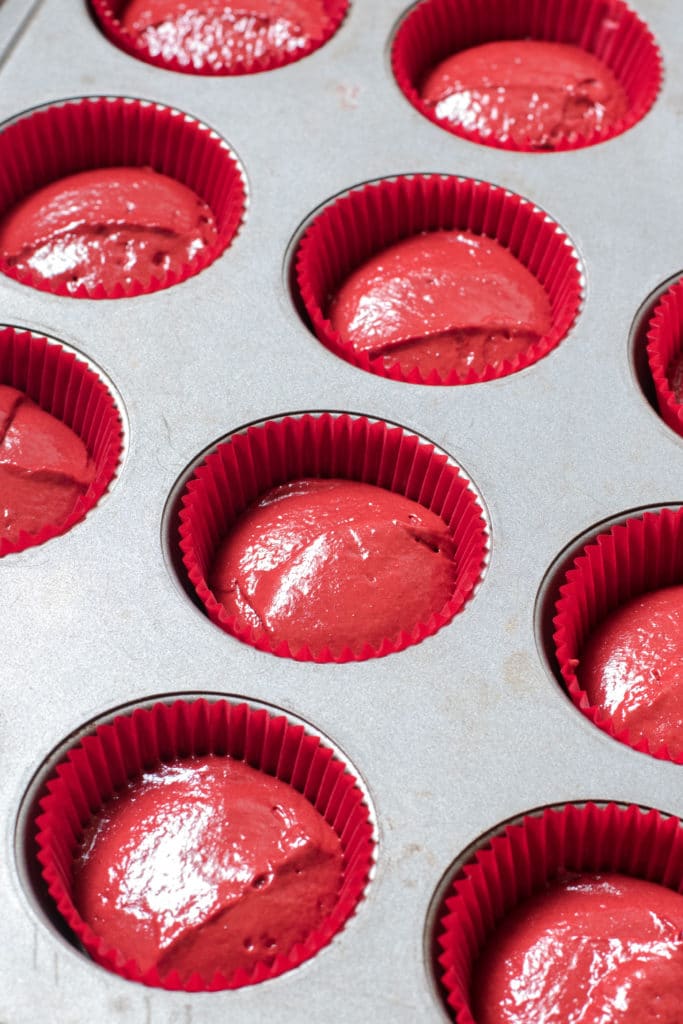 You can make your own favorite frosting for these but honestly, I absolutely love this whipped cream recipe.  It tastes like cream cheese, but has a wonderful texture and is not cloyingly sweet like buttercream.  It’s actually not very sweet at all, which pairs well with the sweet cake below.

I make this “frosting” all the time, and usually make it with Splenda.

It’s the perfect texture for piping too and refrigerates quite well.

Start with cold cream cheese!  If you start with room temperature cream cheese, or overbeat the cream cheese before you add the heavy whipping cream it will never stiffen up. 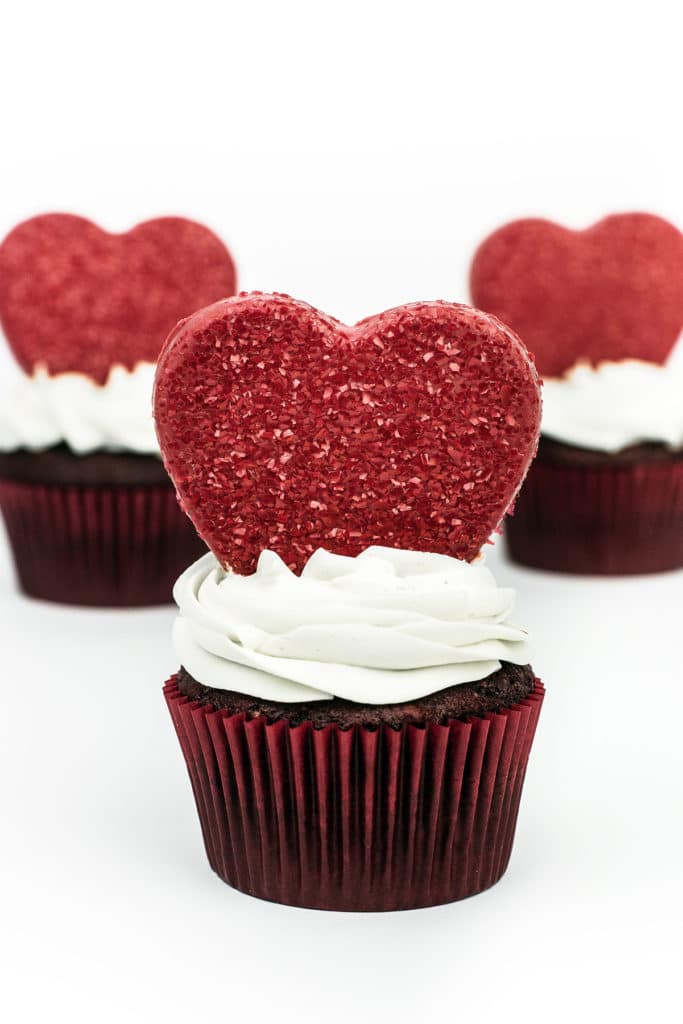 These would make a great Valentine’s Day treat.  The cupcakes freeze very well without frosting so you can make them in advance and decorate them the day you need them.  I like recipes like this, anything I can make ahead of time is always a win.

I also feel these cupcakes get better after a day.  The flavors meld and the cupcakes get a bit denser.  I like a dense cupcake, halfway between a brownie and one of those flavorless airy things they pass for cupcakes at the grocery store.

These make very pretty cupcakes without a lot of work.   The sparkle from the glitter hearts really adds a BIG pop of wow to these treats.

Ugh, now I want another one! 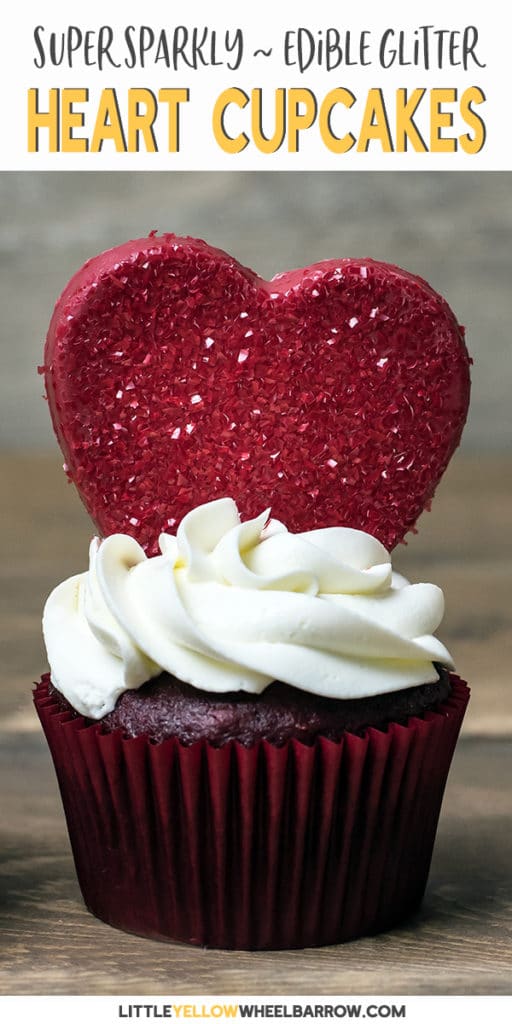