Home » Gardening Projects » Types Of Oregano: How To Grow And Use Popular Oregano Varieties 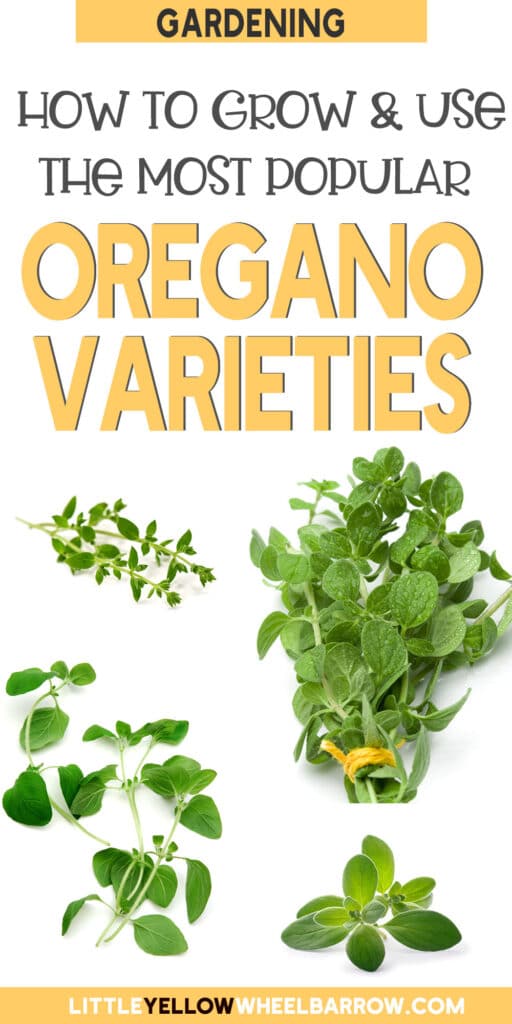 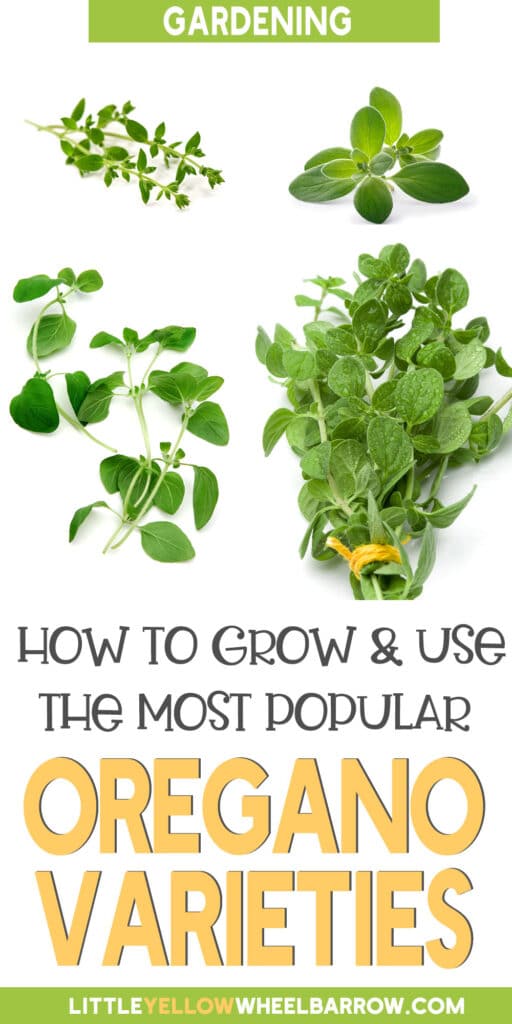 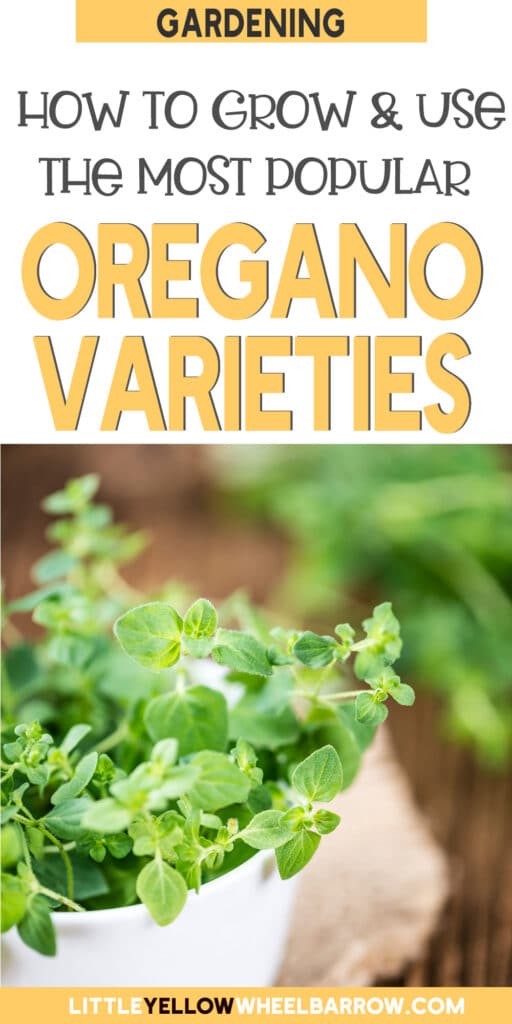 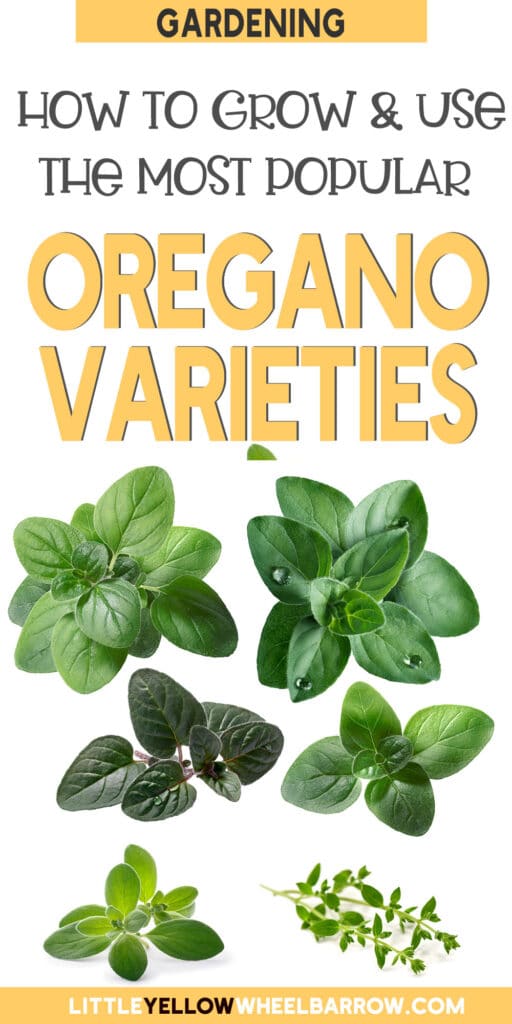 When it comes to cooking, most people think of oregano as a spice that’s noted for its bold flavor that pairs well in Italian recipes. But did you know that there are actually different types of oregano and they all have their own flavors? Learn about the most common types of oregano plants, how to grow them, and how to use them!

Oregano is one of my favorite herbs to grow because it’s easy, tasty, and beautiful. Learning how to grow oregano is just the first step, next you have to decide which variety you want to grow!

Whether you want to grow oregano plants as part of your indoor herb garden, in your outdoor garden, or even as an ornamental plant, check out this list of the most common varieties of oregano. You’ll also find info on how to identify and care for each variety.

This fragrant herb is part of the Lamiaceae family, which is a very large family that’s also home to mint, lavender, and rosemary. In general, it’s a warm-weather-loving, drought-resistant plant native to the Mediterranean region.

Oregano can be found in many recipes, but there are different types of oregano. It’s important to know the differences between them because they all taste, and get used, a little differently!

Thanks to its tangy flavor and pleasant aroma, oregano has become a go-to herb in many different cuisines all over the world. Its easy-to-grow nature probably had something to do with encouraging its spread to regions around the world!

There are several different oregano varieties that you can grow and use in all your cooking, ornamental, and DIY needs. Here’s your guide to the most common varieties and how to use them.

Common oregano is one of the most common types of oregano because its flavor works so well in a large variety of recipes. You’ll often find common oregano in many tomato-based dishes as well as in soups and casseroles.

How To Identify Common Oregano

Common oregano has distinctive square stems that are common to plants in the mint family. This variety has small, medium green, highly fragrant ovate leaves. You’ll also see blooms in pink, purple, or white from mid-summer through the fall.

How To Grow Common Oregano

This type of oregano needs less water than many other plants in the mint family. In fact, the hotter and drier conditions, the more fragrant and flavorful this herb will be. It’s non-fussy nature makes it a breeze to grow.

Ways To Use Common Oregano

Fresh, dried, or frozen oregano has a wide variety of culinary, medicinal, and beauty purposes. This oregano variety is a favorite in Mediterranean cuisine as well as DIY body products.

Greek oregano is a variety of common oregano and is used in Greek, Italian, and Spanish cuisine. It’s also one of the most commonly stocked types of oregano in grocery and spice stores. You’ll find Greek oregano in many tomato-based dishes such as pizza, lasagna, and spaghetti.

How To Identify Greek Oregano

How To Grow Greek Oregano

Oregano plants don’t grow true to seed. If you want to grow this specific variety, be sure to grow it from a cutting. Other than that, give it plenty of light and little water for robust growth.

Ways To Use Greek Oregano

Use it fresh, dried, or frozen for a wide variety of culinary, medicinal, and beauty purposes. If you love the scent and flavor of oregano- the sky’s the limit on its uses!

Native to Turkey, sweet marjoram is considered a different herb from oregano when it comes to cooking. However, all varieties of marjoram are types of oregano.

How To Identify Sweet Marjoram

Sweet marjoram has small gray-green ovate leaves and tends to grow in a mounding, bush pattern. It has dense stems and boasts beautiful clusters of white and pink blooms in the summer.

How To Grow Sweet Marjoram

Sweet marjoram is as easy to grow as oregano, and it adds a lovely sweet fragrance to the garden. It grows as a tender perennial in warm regions and as an annual in cooler regions, making it a perfect addition to your indoor herb garden!

Ways To Use Sweet Marjoram

It has a flavor that’s sweeter and more delicate than common oregano but is still used in many of the same types of dishes. Sweet marjoram can lose a little bit of its flavor when heated, so add it to your dish at the end of cooking.

This quick-growing herb has a robust flavor that adds a delicious spicy oregano taste to your dishes.

How To Identify Syrian Oregano

Syrian oregano has hairy stems that stand tall and are packed with gray-green ovate leaves.

How To Grow Syrian Oregano

This oregano variety has a vigorous growth habit that can grow as high as 4 feet in dense clumps. It loves hot temperatures, lots of light, and dry soil, and it won’t tolerate high levels of humidity. Grow it outdoors all year long in hot climates and bring it inside for the winter in cooler climates.

Ways To Use Syrian Oregano

Syrian oregano tastes similar to mint with the addition of a slightly spicy kick. It can be used in any recipe that uses common oregano but is frequently used in meat and vegetable recipes in Middle Eastern cuisine.

Although Cuban oregano isn’t a member of the true oregano family (Origanum), it’s a succulent in the same larger Lamiaceae family which is home to oregano, mint plants, and more. Other common names for Cuban oregano include Mexican mint, Spanish thyme, and Indian borage.

How To Identify Cuban Oregano

Cuban oregano looks more like varieties of mint than oregano with grayish-green fuzzy leaves that have serrated edges and a strong, pleasant fragrance. It has trumpet-shaped flowers that can be pink, lavender, or white.

How To Grow Cuban Oregano

Cuban oregano is a frost-tender herb that grows as a perennial in only the warmest climates. In cooler climates, it grows as an annual and makes a wonderful addition to any container garden (then bring it indoors for the winter).

Ways To Use Cuban Oregano

It has an aroma that’s reminiscent of common oregano, but its flavor is stronger than the Greek variety. Use less of the Cuban variety in your recipes than you would use with common or Greek types of oregano.

This delicious oregano variety is a hybrid of common oregano and sweet marjoram. It’s a versatile and tasty herb that also happens to look pretty amazing in the garden.

How To Identify Italian Oregano

Italian oregano looks similar to Greek oregano, but with larger leaves that are slightly brighter green. It shows off its beautiful small pink flowers in the summer.

How To Grow Italian Oregano

This variety grows best in hot and dry climates and works well in containers, garden beds, and even indoors. Like its Syrian cousin, Italian oregano doesn’t like humidity.

Ways To Use Italian Oregano

This oregano variety is different from sweet oregano but still common. You can typically find it in a lot of larger nurseries or home improvement stores. It has a deliciously sweet scent and spicy flavor.

How To Identify Golden Oregano

This is one of the hardier types of oregano. It grows in a clumpy pattern with woody stems that have golden yellow small oval leaves. It shows off its purple or pink flowers in the summer.

How To Grow Golden Oregano

It’s a low-maintenance variety that’s easy to grow. The leaves of golden oregano are intensely aromatic and its distinctive golden coloring makes it a beautiful addition to your garden bed or container garden.

Ways To Use Golden Oregano

Golden oregano has a flavor that’s much more subtle than varieties of oregano that are typically used in cooking.

For this reason, it’s often grown as an ornamental variety but it can be used in recipes when you want a very mild oregano flavor. I recommend growing it as a border plant or in containers where you would enjoy its fragrance.

If you enjoy the fragrance of oregano or the taste of this herb in your recipes, I hope you’ll try growing it yourself! No matter which of the types of oregano you decide to grow, you’ll love the wonderful addition this herb makes!

Or check out all our herb-growing guides!

Previous Post: « Chive Plant: How To Grow, Harvest & Use Them
Next Post: Knitting vs. Crochet: Which Method Is Better For Beginners? »