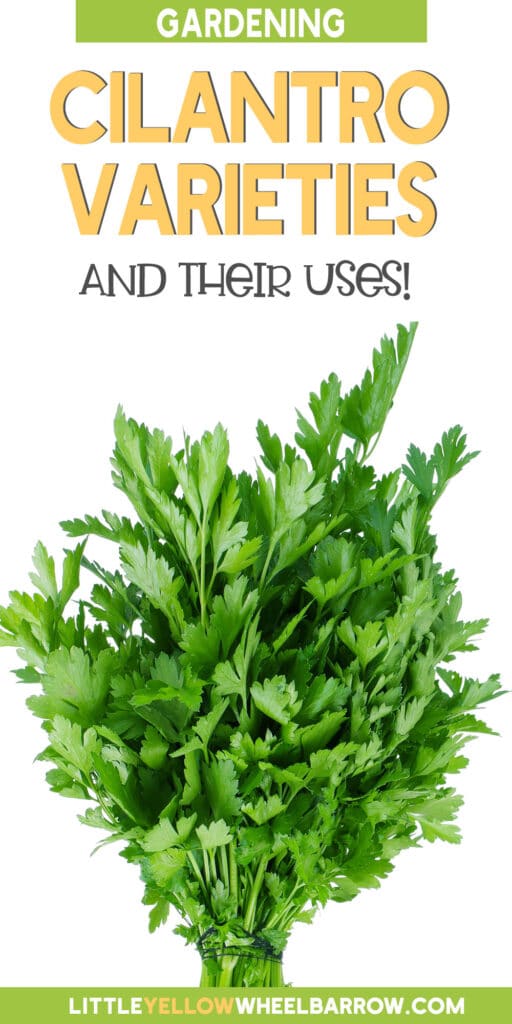 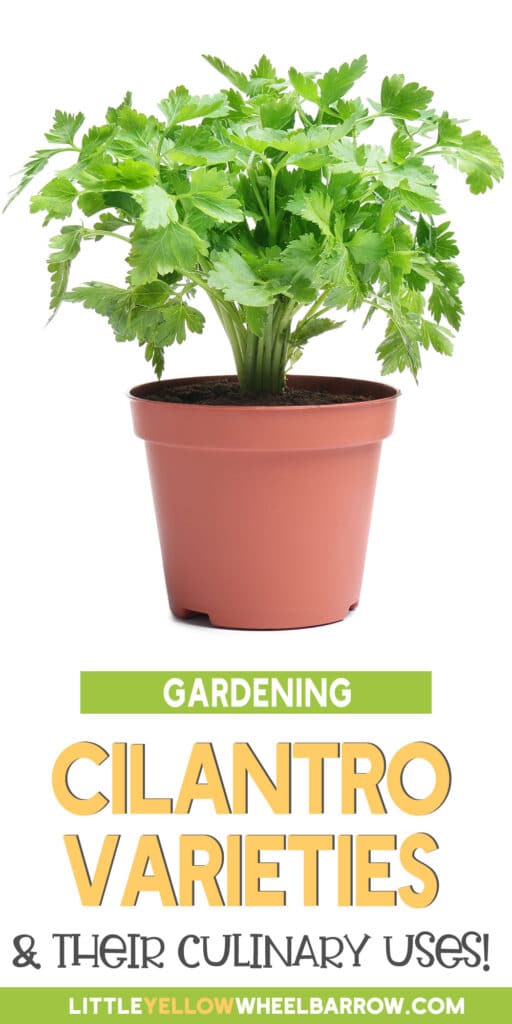 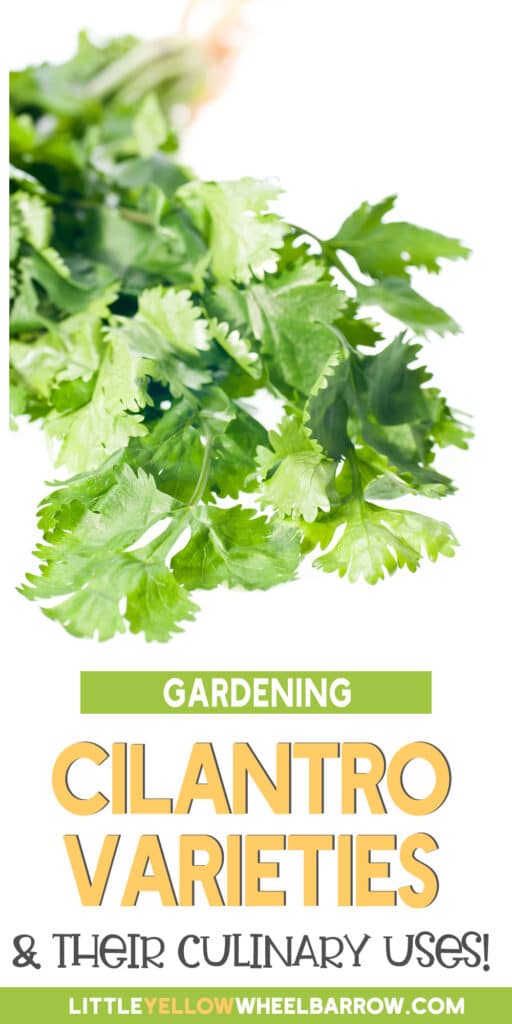 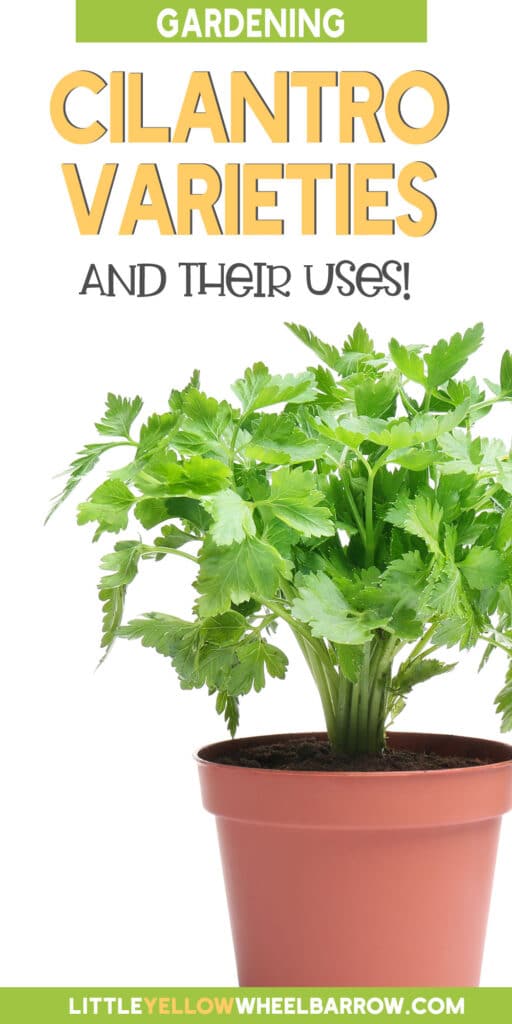 Fun fact: cilantro is one of those herbs that people either seem to love or hate, and the reason for that may be genetic. Some people may create an enzyme that reacts with compounds in cilantro to create an unpleasant soapy or rank flavor.

I know some people love to hate cilantro, but I personally love it and use it in a lot of my recipes. If you aren’t genetically predisposed to hating cilantro, I have some great news: its reputation of being difficult to grow is false! Once you learn about growing cilantro, you have to decide which type of cilantro to grow.

As a matter of fact, I have more good news. You can grow cilantro plants in your outdoor garden or as part of your indoor herb garden, which helps those of us who live in colder areas with very short growing seasons.

There are a few different types of cilantro to choose from, depending on what you want from your herb. Take a look at this list of the most common varieties of cilantro so you know the difference between them and can decide which type of cilantro you want in your garden.

This bushy herb is part of the Apiaceae family, which is the same family that carrots and dill belong to. In general, this herb has a reputation for being difficult to grow. But I have a secret for you: it’s actually really easy to grow as long as you prevent it from bolting and going to seed.

Then again, you may actually want it to go to seed. If that’s the case, cilantro just needs good light and regular water to grow up to be a happy, healthy plant.

Another part of cilantro’s questionable reputation may stem from the fact that people call it different things depending on where you live. Internationally, this herb is called coriander leaves. But, in the US (and usually in Canada), it’s called cilantro (which happens to be the Spanish word for coriander). but then at other times, people may call it Chinese parsley.

But, I have good news: learning about the different cilantro varieties is easier than that plant name lesson was to absorb!

The flat, toothed leaves of his herb closely resemble parsley – I’ve even confused the two in the grocery store when I’ve been rushed! But, if you take a bite into the two herbs, you definitely won’t confuse them again. Where parsley’s flavor is very mild, cilantro’s is much bolder.

Then, there’s the matter of this herb’s strong tendency to reseed. When growing conditions get hot or dry, the plant will send up tall shoots that flower and grow seeds. Every part of the plant is edible, including the seeds, which are known worldwide as the spice coriander. In other words, cilantro is both herb and spice, with the leaves being the herb and the seeds acting as the spice.

How To Identify Leaf Cilantro

How To Grow Leaf Cilantro

Cilantro grows best in temperatures of 55-80 degrees Fahrenheit. Plant in full sun after the last frost but while the weather is still cool. When the temperatures really warm up, you’ll notice that the plant grows quickly and can bolt in a flash. To prevent that, keep the plant watered, give it some afternoon shade, and regularly harvest some leaves.

If you live in warmer climates (zones 8 and above), look for varieties such as “Long-Standing”, “Jantar”, and “Leisure” which are slow-to-bolt cultivated varieties.

Ways To Use Leaf Cilantro

This cilantro variety is your go-to for many recipes, including:

Use the leaves fresh or at the very end of cooking because they lose their flavor quickly when heated.

Thanks to its tangy, spicy lemon-lime flavor, cilantro has become a go-to herb in many different cuisines all over the world. From Asian cuisine to Mexican cuisine and everywhere in between, the world has embraced this herb.

To catch this herb at its best, use the leaves before the plant bolts (or flowers and goes to seed). Once the plant bolts, the leaves lose some of their typical flavors and also become more bitter. Unlike herbs such as mint, oregano, or basil where the varieties are significantly different from each other, the differences between types of cilantro are more subtle.

Here are the most common cilantro varieties and what you need to know about them.

Unlike other cilantro varieties, Delfino has foliage that’s more fern-like. Its leaves more closely resemble its dill and carrot cousins than parsley. This type of cilantro tends to produce a higher yield than other varieties do.

This type of cilantro has a milder, warm flavor that’s less acidic than other cilantro varieties. The seeds add lovely light citrus notes to citrus cakes, soups, chutneys, and curries.

Of all the types of cilantro, this variety is probably best suited for hot climates. It’s slow to bolt, more flavorful, and its leaves are darker, narrow, and have smooth edges instead of looking like parsley.

Also sometimes called “spiny coriander”, this variety has long dandelion-looking leaves, bolder flavor, and is typically used interchangeably with leaf cilantro in Caribbean and Asian cuisine. This type of cilantro is actually not true cilantro but rather a botanical cousin, and it prefers more shade and moisture than leaf cilantro.

If you happen to belong to Team Cilantro, I hope you’ll try growing one of these cilantro varieties yourself! Fresh herbs from the garden always taste way better than herbs from the store or their dried counterparts.

Previous Post: « Cilantro Plant: How To Grow, Harvest & Use Them
Next Post: Guide On All Types of Parsley »