Home » Gardening Projects » Herb Gardening » Cilantro Plant: How To Grow, Harvest & Use Them 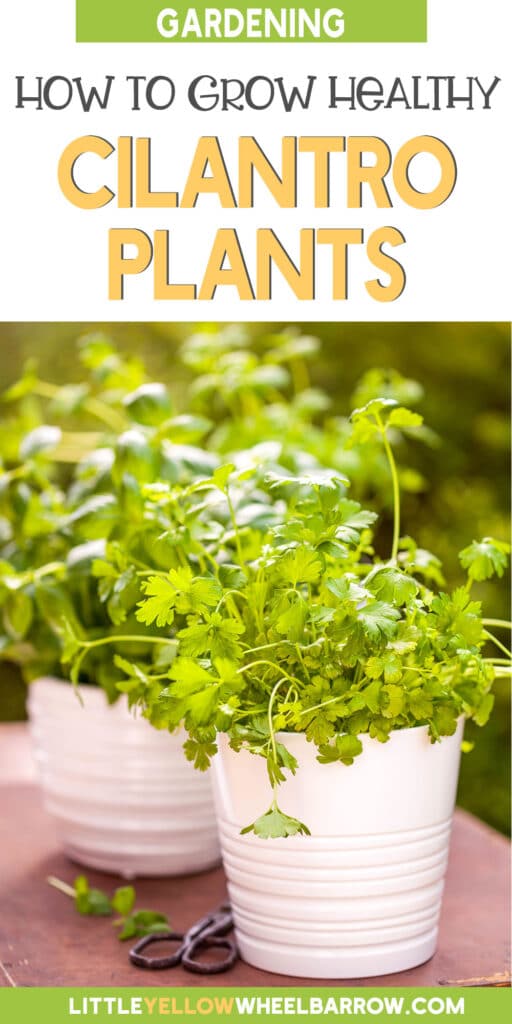 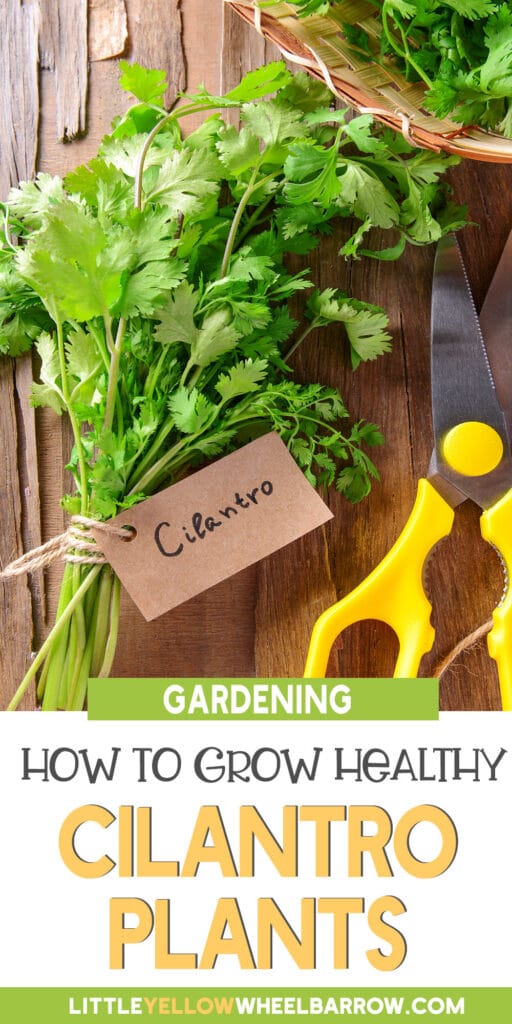 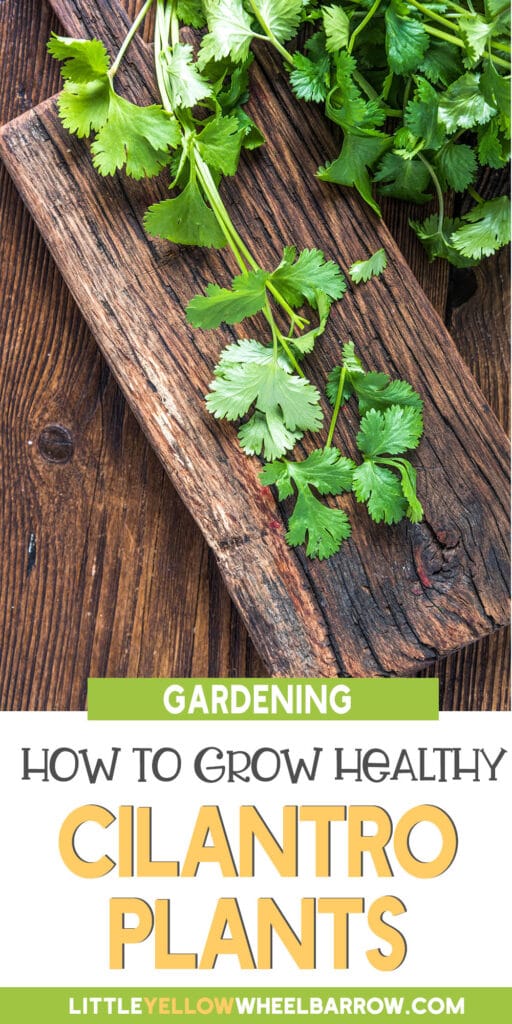 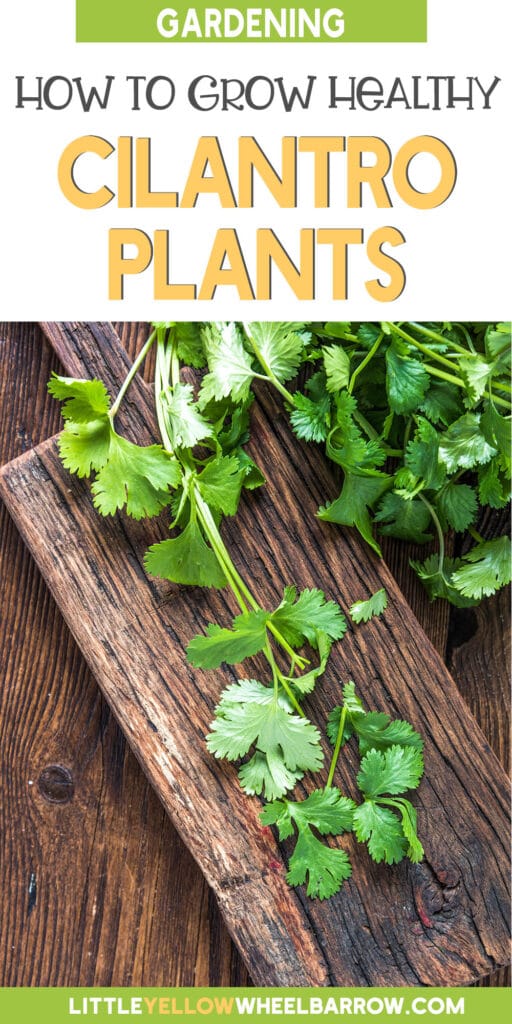 The cilantro plant is a common ingredient in many cuisines around the world. This herb has a reputation for being difficult to grow which couldn’t be more untrue! From planting to harvesting your cilantro plants, here’s everything you need to know about growing cilantro.

Cilantro seems to be one of those herbs that people either love or hate in their food. It’s a staple in Mexican cuisine and is frequently used in Asian dishes as well.

However, to add to the “controversy” around cooking with this herb, the name of the cilantro plant itself is a bit of a conundrum. In most parts of the world (and sometimes here in Canada), the leaves are called coriander leaves while the seed is called coriander seed.

In contrast, in the US (and usually in Canada), the leaves of this herb are called cilantro while the seed is called coriander.

And, if all that wasn’t enough to confuse you, this same herb can also be called Chinese parsley. What’s in a name? Well, in this case, I really don’t know! I’d say that as long as you know the many monikers given to this herb, you’re good to go.

In addition to its position as a flavorful herb with a confusing name, cilantro provides many health benefits and can be used in several DIY body products.

I’ve been sharing plant care guides on some of my favorite herbs, such as rosemary and basil. Today, I’m sharing everything you need to know about growing cilantro.

And, if you love herbs, be sure to read up on growing mint plants and chive plants, too!

Cilantro is a hardy annual herb in the parsley (Umbelliferae or Apiaceae) family along with its lacy-leaved cousins: dill, fennel, and carrots.

It has a rich and interesting history dating back thousands of years. People have found coriander seeds in the Nahal Hemar cave in Israel that dates back over 8,000 years (wow!). And, the ancient Egyptians used it for both culinary and medicinal purposes, with references to it made in the Egyptian medical “text” called Ebers Papyrus.

Finally, when King Tut’s tomb was discovered, coriander seeds were found scattered around inside.

It currently grows wild throughout western Asia and southern Europe, but it grows so well that gardeners around the world can grow it in their herb gardens. A relative “newbie” to the western hemisphere, Europeans brought cilantro to North America in the 1600s.

Now, it seems as if almost the entire world embraces cilantro, as it’s commonly found in recipes from North Africa, the Middle East, Europe, India, Asia, and even Mexico.

Let’s explore this popular herb and learn how to care for it as well as some of the different ways to use your fresh cilantro.

Note: Did you know that there are several different types of cilantro all with different culinary purposes. We put together a post detailing the flavor profile and uses of each one.

Growing Cilantro Plants: Everything You Need To Know For Success

Cilantro plants are super easy to grow and thrive in hot, dry conditions that would harm many other plants. Because it requires hardly any care on your part, it’s a great plant for beginners to add to their gardening resume.

The flavor of fresh cilantro straight from the garden is far better than any other version of the herb that you may typically use!

Here’s how to grow cilantro.

Cilantro grows better in cooler weather, as it can quickly bolt and go to seed in hot weather. Try growing cilantro:

Here are a few things to keep in mind when growing cilantro plants so they stay healthy and happy.

Cilantro can fall prey to:

If you notice bugs attacking your cilantro plants, spray them down with soapy dishwater to get rid of them and keep them away.

When growing cilantro, keep an eye out for fungal wilt and mildew. If you notice these on your plants, remove the affected leaves as soon as possible.

I think the thing about growing cilantro that most (beginner) gardeners have difficulty with is the plant’s tendency to bolt and go to seed. Once the weather heats up, it tends to do this very quickly. When that happens the leaves lose a lot of flavors because the plant is putting its energy into growing seeds.

To prevent your plant from bolting, give it water and shade in hot regions and harvest leaves frequently. Once it starts sending up shoots, it will flower and grow seeds. If you want your plant to come back next year, simply let it do its self-seeding thing.

To harvest your cilantro, wait until your plant is at least 6 inches tall and cut off sprigs as needed in your cooking. Avoid cutting off more than a third of the leaves at one time.

Before winter, cut your cilantro plants back to the ground and freeze them!

In my opinion, cilantro is best when used fresh and straight from the garden. You can store fresh cilantro wrapped in a damp paper towel in your fridge for up to 2 days. However, if you live in a cold region, I recommend freezing your cilantro leaves to preserve them so you can use this fresh herb all year long.

To freeze your cilantro plant, all you have to do is put your fresh leaves into a freezer-safe bag and seal it…or chop up your leaves and freeze them into ice cube trays. To use your frozen cilantro, simply toss an ice cube into your recipe just as you finish cooking!

If you want to save the coriander seeds for cooking, harvest any visible seeds that you can off the plant. Crush the outer husk to get to the seed. Then, use the seeds whole or grind them up.

If you want to save your coriander seeds to grow cilantro next year, crack the outer husk of the seeds and then soak the seeds in water overnight. Remove them from the water and let them dry before storing them for the next season.

Here are a few fun facts about cilantro plants!

Ways To Use Cilantro Plant

Cilantro plants add a delicious flavor to a lot of different recipes.

Using cilantro in culinary recipes is one of the most common uses for this flavorful herb. Add cilantro to:

Cilantro possesses powerful antimicrobial antibacterial properties, making it a great natural cleanser. Combined with its skin-soothing properties, and you have a natural herb that can be added to many exfoliating and soothing DIY body care products such as:

I hope that this post inspires you to grow and use a cilantro plant in new and interesting ways! Whether you simply want to grow a delicious herb to use in your recipes or you want to use it for its natural benefits, there are plenty of reasons to try growing cilantro. And I promise it isn’t nearly as hard as its reputation makes it seem!

Previous Post: « How To Dry Out Dahlias-The Best Preserving Method
Next Post: How To Grow Lavender In Pots Successfully! »