Home » Craft Projects » Crochet » Knitting vs. Crochet: Which Method Is Better For Beginners? 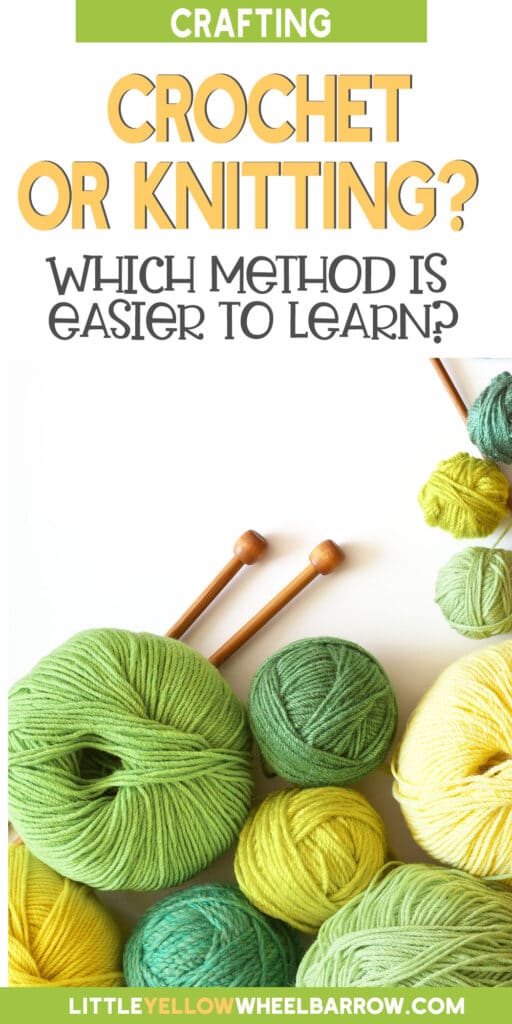 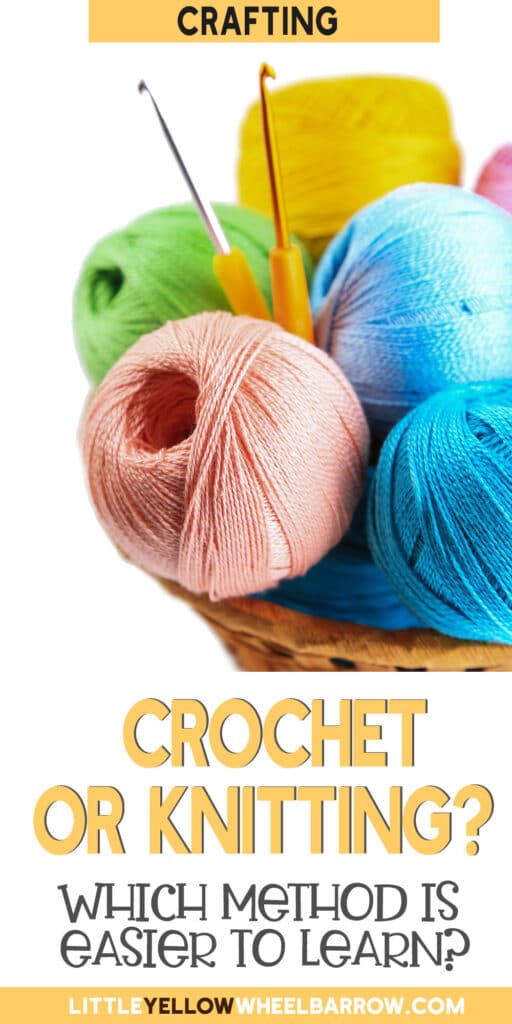 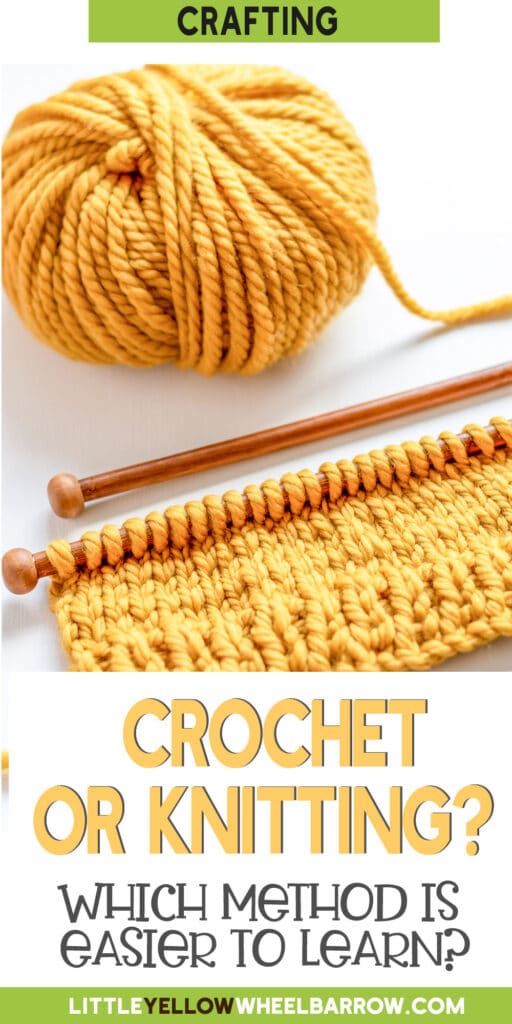 Have you been dreaming of making a beautiful sweater or baby blanket? Needle and yarn crafts such as knitting and crochet yield wonderful products and are fun to make, but which one do you want to learn? Read all about knitting vs crochet: the similarities, differences, pros and cons, and even some great ideas for beginner projects.

Thinking of taking up a new craft? Two of the most popular needlecrafts are knitting and crochet. And they’re also the two that cause the most confusion between them because they are so similar. Although they have similarities, they also have differences that make them 2 distinctly separate crafts.

No matter which one you choose to learn, both knitting and crochet are creative, relaxing, and yield beautiful finished products!

Can you tell them apart? Unless an uncommon stitch is used, it’s usually pretty simple to tell the difference between knitting and crochet just by looking at the item.

Let’s explore the similarities and differences between them as well as the pros and cons of each crafting method.

Knitting vs Crochet: The Similarities

As I mentioned above, knitting and crochet are similar crafts. Both methods are essentially different ways of looping yarn by using needles. Even though they aren’t the same, they are similar enough to cause confusion for people who aren’t familiar with these crafting methods.

Here are some similarities between them to help explain the confusion.

Both knitting and crocheting use yarn. Generally speaking, they both use the same type of yarn as well as the same amount of yarn for similar projects.

Both of these crafts use similar skill sets including:

Although the needles are shaped differently, both crafts use needles as a means to loop and stitch the yarn.

Both of these crafts yield similar benefits including relaxation, creativity, and a beautiful (practical) finished product.

Knitting vs Crochet: The Differences

Now that we’ve gone over the ways that these crafting methods are alike, it’s time to go over the differences to dispel any confusion between knitting and crochet.

While the same types of yarn can be used for most projects, there are some different styles of yarn that will be better suited for one type of craft or the other. Very chunky yarns typically do better with crochet, for example.

Both knitting and crochet use some type of needle to manipulate the yarn.

However, knitting uses knitting needles which are a pair of straight needles with pointy tips on one end and a button-shaped cap on the other end. They can be made from plastic, wood, or metal. Additionally, they can be completely separate from each other or connected by a cord (a.k.a., circular knitting needle).

Crochet uses a single needle with a small hook on one end. In fact, a crochet needle is often called a “hook” due to the hook shape. They come in a large variety of sizes from very small to quite large and are typically made of aluminum, plastic, wood, bamboo, or even bone.

If you’re looking at a finished product, a simple glance will clue you in as to whether it is knitting vs crochet. That’s because the stitches of each are structured differently in several ways.

Knitting uses interlocking loops which allow individual stitches to stretch (one reason why knitting is so popular for sweaters or socks!).

In contrast, crochet stitches resemble knots so they are sturdier but limit how much stretch there will be (one reason why crochet is preferred for blankets).

Number Of Stitches Created At A Time

With knitting, all your stitches stay on your needles until you complete the entire row. This means that if you drop a stitch in the row, it can cause an entire column of stitches to unravel.

With crochet, you only complete one stitch at a time. So, if you drop a stitch, your item may look a little off, but as a whole, it will still maintain a strong structure without the risk of unraveling.

All that said, these are just general differences. Both crafts have a variety of stitches, some of which mimic those of the other craft!

The general rule of thumb is that knitted products will be softer and have more drape while crocheted items will be stiffer. While that used to be almost universally true, now there’s an even greater variety of yarns that muddy this distinction between the two crafts.

Knitting vs Crochet: Which Is Better?

As with any new skill, both of these needle crafts take time, practice, and patience to learn. Thanks to their similarities and differences, it’s not as much a matter of which one is better because it really comes down to personal preference.

Some people will prefer knitting over crochet while others will feel the opposite way. And of course, there will be some that love both nearly equally (me!).

Evaluating the pros and cons may help you decide which one to start learning (first).

Pros And Cons For Knitting vs. Crochet

How To Get Started

Here’s what you’ll need to get started with EITHER knitting or crochet for the first time: a hook, yarn, and scissors. That’s it!

As a brand-spankin’ new beginner, having some sort of stitch guide or tutorial to teach you the basic stitches is a helpful bonus.

Ok, now that you’ve decided to try knitting or crochet what can you make? Here are some great ideas for projects that are perfect for beginners.

We also have a list of the best beginner crochet kits for you that include everything you need to complete your first projects, or help to advance your skills. They also make great gifts!

Due to the confusion between these two craft styles, I see lots of questions asked by readers again and again. Here are a few of the most common ones I see.

​​Which is easier to learn: knitting or crocheting?

I think that both are challenging to learn right at the beginning. But all in all, I think that crochet is easier for a brand new beginner to learn. There’s just less to manipulate and keep track of at the same time.

I learned how to knit when I was a wee child, and always felt I could never learn to crochet. But after learning a few simple stitches I find crochet much easier to work and create. Creating projects off the top of my head seems much easier with a crochet hook in my hand.

Is knitting better than crochet?

They both have their advantages, which makes this question tricky to answer. I think that instead of asking which one is better (in general), a better question is to ask which style is better for each individual project.

In the end, though, the final answer will usually come down to personal preference. Some people will naturally prefer one style over the other, and a few (like me!) will enjoy doing both.

Should I crochet or knit a blanket?

Honestly, you can either crochet or knit a blanket. However, crochet creates a sturdier, stiffer final product which works better for blankets. I recommend crocheting your blankets – and it can be really fast if you use chunky yarn to make a chunky crochet blanket.

I hope that this post exploring knitting vs crochet helped to highlight both the differences between these yarn and needle crafts as well as to show just how amazing both are! As with any new craft, there’s a learning curve, but they’re also simple enough that one beginner project will be enough to help you master the basics.

Which one will you learn first?

Previous Post: « Types Of Oregano: How To Grow And Use Popular Oregano Varieties
Next Post: Wreath Supplies You Need To Make Make A Perfect Wreath »