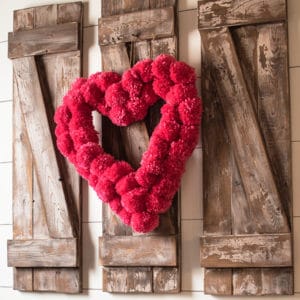 So I’ve been on a bit of Valentine’s Day craft kick. This DIY yarn pom pom wreath is just the latest installment of pink fluffy things in my house for the holiday.

Honestly, this project started out in my head very differently.  I intended there to be two different yarn colours.   When the yarn arrived there was no way the colours were going to work together.  That stuff drives me crazy (ordering online and it’s not the colour rendered on your computer screen!).   It usually delays posts, puts me behind schedule and sometimes – sometimes the projects that don’t work out end up in the fail pile.

But once I started making the pom poms (which by the way are SUPER fun), the project started to build itself.  By the time I made 15 pom poms I made the decision to make a pom pom rug too, so stay tuned for that crazy project.

SO cute – so fluffy – and super easy to make.

How to Make Pom Poms

So the tutorial for this pom pom wreath starts with a super simple DIY pom pom tutorial.

You will need to make about 40 large size pom poms, and honestly, the easiest way to make them is with a pom pom maker.

You can absolutely use a cardboard template, or any homemade pom pom maker.  They work, but they do have a few limitations.

The Clover pom pom maker used in this tutorial makes the process go much quicker.   The other benefit to a pom pom maker is they last.  If you are making, or plan to make, a lot of pom poms it’s totally worth the investment to buy a pom pom maker.   Like, say, you were going to try your hand at making a pom pom rug for instance, a pom pom maker is a MUST have – trust me on this point.

This post may contain affiliate links.  If you click one and make a purchase, I may receive a commission at no additional cost.  You can read our disclosure policy here.

The Clover pom pom maker makes super fluffy, full, perfect little balls of yarn.  You do need to trim them up, but I find I need less trimming when I use the pom pom maker vs a homemade version.

I also picked a chunky yarn that was bright and vibrant, it’s almost neon pink it’s so bright!

You can always do what you want as far as yarn size, colour or even pom pom size, but the exact supplies I used for this project are listed below.

If you are curious what the pom poms will look like with different size yarns or different size pom pom makers check out this post: Yarn Pom Pom Comparission. 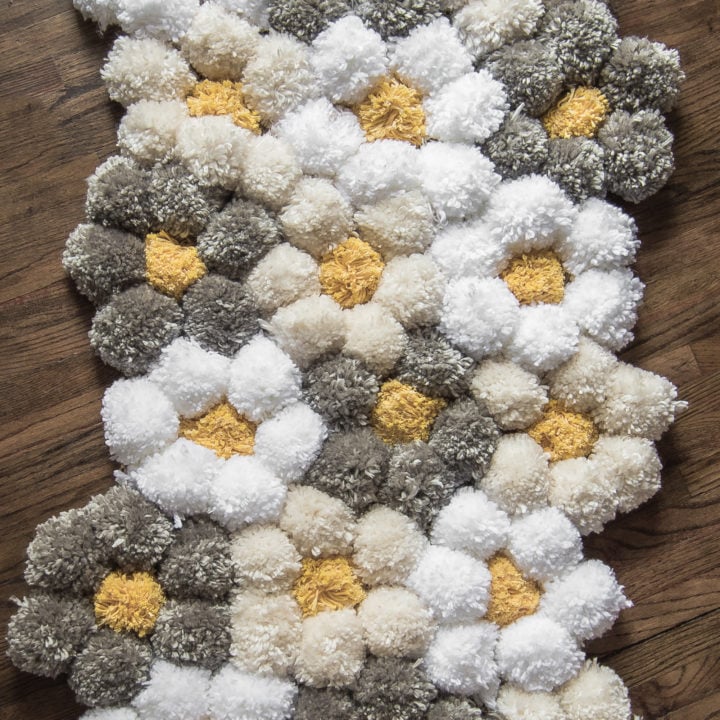 How to Make a Pom Pom Rug the Easy Way 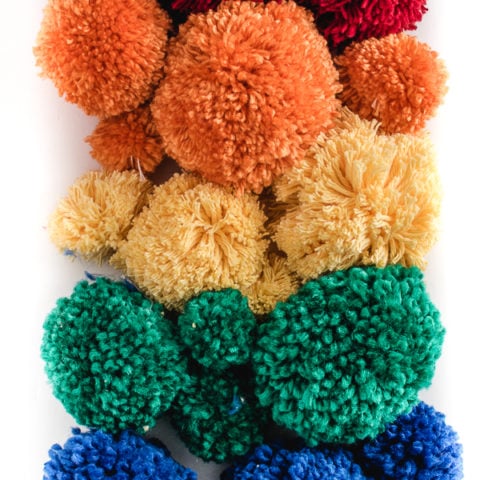 Yarn Pom Poms - How to Pick the Right Size Yarn for Your Pom Pom Projects. 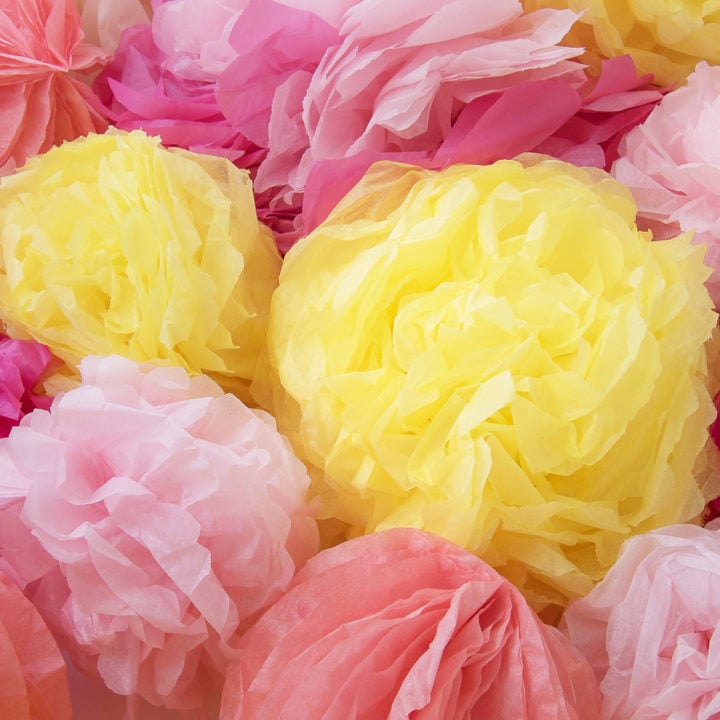 The Clover pom pom maker folds out with two sides that look like the photo below.  You start your yarn on one side and wrap it around the two half circles and then you do the same on the other side.  Easy Peasy!

No need to tie off your yarn or knot the yarn to get started. Wrapping the yarn around catches the yarn below and that works perfectly fine.

Make sure you wrap your yarn correctly.  Go side to side keeping the yarn close the last wrap around.

Think of a bobbin, you want each strand to border the last strand.

It sounds time-consuming, but it really isn’t!

You don’t have to be perfect with this, just don’t bounce from one side to the other side of the half circle because this will create longer lengths of yarn after the pom pom yarn is cut.  Those longer yarn strands will need trimming and make your pom pom look a bit wonky.

The next tip is to FILL your half circles as much as you can.  Wrap the yarn around the pom pom maker until the half circle is full.

Flip this side up into the pom pom maker and repeat on the opposite side.

This is the fun part and where I feel the pom pom maker does a much better job vs a cardboard version.

I am not knocking the handmade version, but if you are making a lot of pom poms, like you would need for this wreath, the cardboard templates tend to not hold up and you will need to make a few extra templates to get you through the project.

The pom pom makers also have another advantage; they have a small channel you slide your scissors through to cut your pom pom yarn.

You then slide your scissors into the channel and cut all your yarn strands on one side, and then the other.

The pom pom maker at this point looks like weirdly coloured hamburger.

At this point, all that is left to do is to wrap a piece of yarn through the center, pull tight and tie off.  Use a 12 inch strand of yarn, wrap twice, and leave the tail.  You will want those pom pom tails to tie on to your wreath frame later.

I tend to wrap my yarn around twice, just to ensure my pom pom is fastened very well.

The pom pom maker slides apart very easily. you just pop it off and pull your fluffy pom poms from the tool.

I give my pom pom a shake to fluff them out and even out the yarn strands.

Give your pom poms a quick haircut, removing any longer strands to make the pom pom perfect.

They are SO much fun to make and trim, but the yarn bits do get all over the place.

You need about 40 large size pom poms to complete the wreath.  I was able to make 10 medium size pom poms from each skein of yarn I purchased.

Adding the pom poms to the wreath frame is a piece of cake.

Remember those longer tails we left after we wrapped the yarn around the pom pom?  Just use those tails to attach your pom poms to the wreath form.   In the photo below I used some white yarn so you could see how I tied them on to my wreath frame.

The frame I purchased had 3 rails so I simply staggered my poms poms left to right all the way around the frame.

Make sure your pom poms are nice and tight so your wreath looks full when you’re finished.  Keeping the pom poms tight together also keeps them from flopping around and gives the whole wreath a bit of stability.

I am enamored with pom poms. They are a load of fun to make, and there is something whimsical about them.  Pretty, fluffy things that are just so much fun to use in craft projects.

This pom pom pom wreath is a perfect Valentine’s day project, it would look sweet in a nursery, or even above a candy bar.  There are all kinds of ways to use these little balls of fluff!

These wreaths are beautiful though, regardless of the colour or shape, the pom poms just add so much texture.

Check out these other cute wreath ideas for any holiday:

How to Make a Rag Wreath - Super Fluffy! 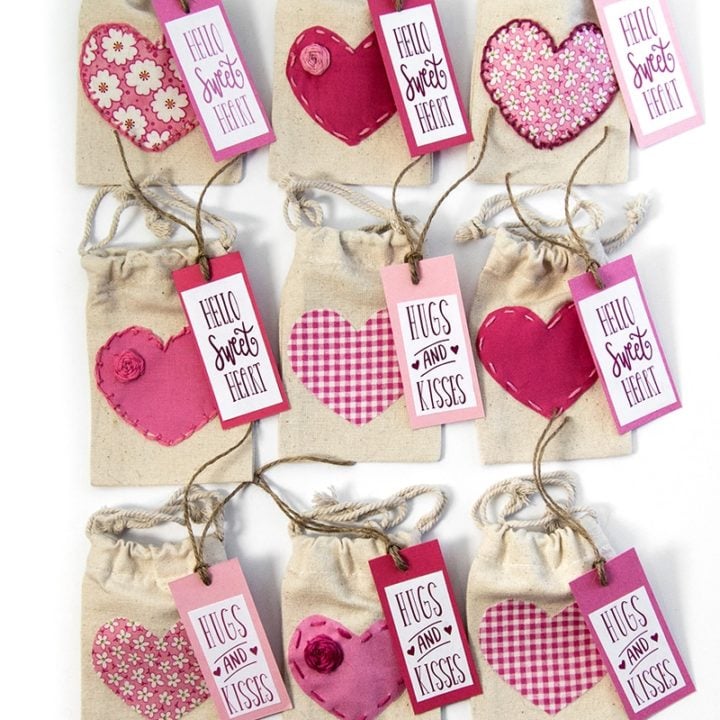 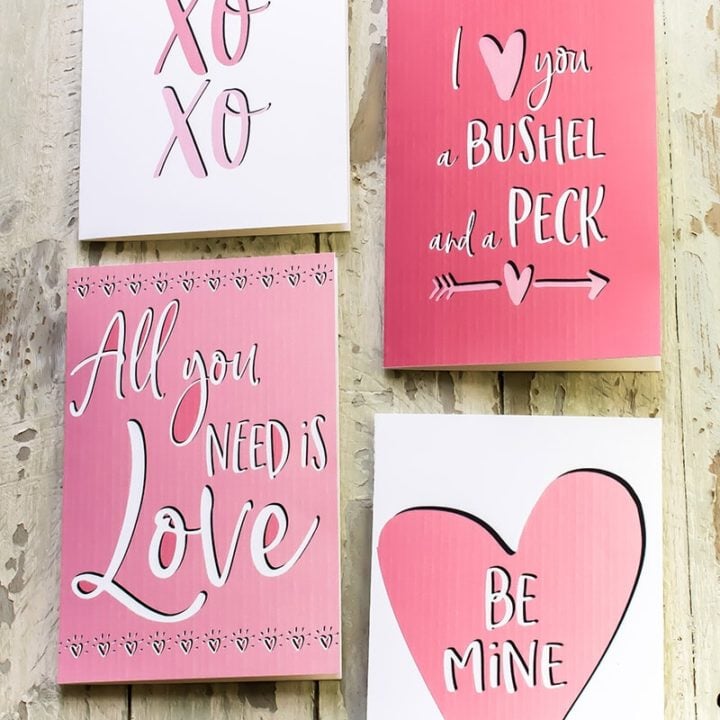 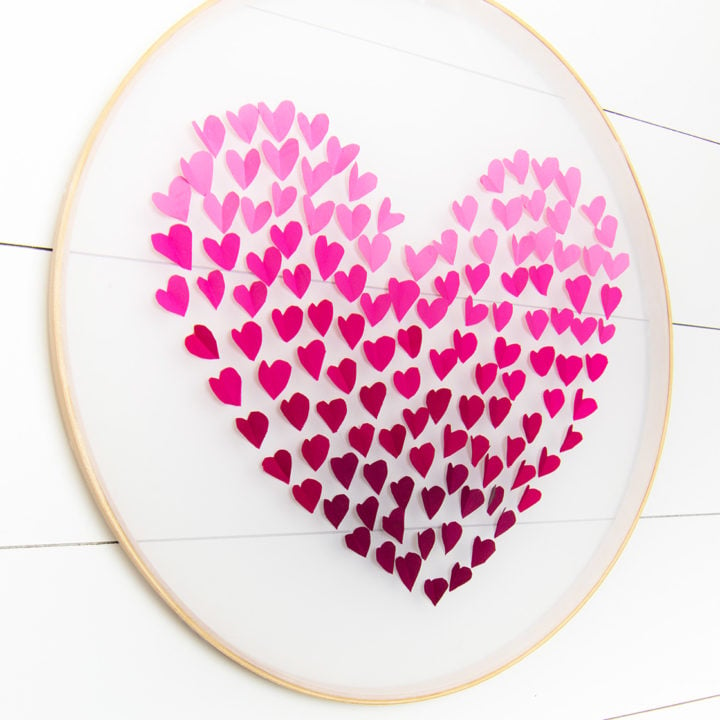 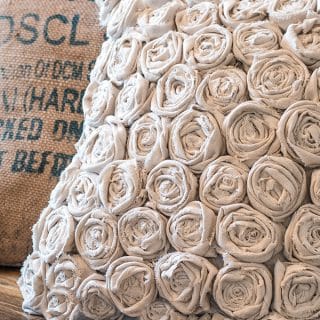 How to DIY a Beautiful Rose Textured Pillow